In March 2014, Solvang ASA of Norway confirmed the option for Wärtsilä Open Loop Scrubber Systems to be installed aboard another of its LGC (Large Gas Carrier) vessels. This confirmation follows the order that the company placed in late December 2013 for two such vessels. The company has already taken delivery of Wärtsilä Open Loop Scrubber Systems, which have been installed aboard the VLGC (Very Large Gas Carrier) vessels, the ‘Clipper Quito’ and ‘Clipper Posh’. One such order was announced in January 2012.The Hyundai Heavy Industries (HHI) shipyard in South Korea is delivering all of these new Solvang vessels.

In addition to these new build projects Wärtsilä has also in March 2014 signed a contract with Solvang to retrofit its Open Loop Scrubber System onboard the LPG (Liquefied Petroleum Gas) tanker “Clipper Harald”. This installation is scheduled to be delivered in summer 2014. This now brings the total number of Solvang vessels to order Wärtsilä scrubber systems to six.

Wärtsilä will also supply its Hybrid Scrubber Systems for four new Post-Panamax car carriers currently being built for Wilhelmsen Lines Shipowning Malta (WLSM), a subsidiary of Oslo-based Wilh. Wilhelmsen ASA. The contracts were signed in the third quarter of 2013 and in the first quarter of 2014. These vessels will be delivered from the Hyundai Samho Heavy Industries (HSHI) yard in South Korea. HSHI is a subsidiary of HHI. 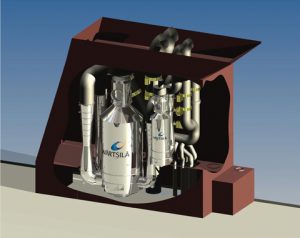 Two further Wärtsilä Open Loop Scrubber Systems are to be delivered aboard a new VLGC being built at the HHI yard for Dorian-LPG Ltd of Greece. This contract was also signed in the third quarter of 2013.

Wärtsilä and HHI leaders of the industry

“The acceptance of exhaust gas cleaning systems as a means of achieving compliance with environmental regulations is rapidly increasing. Wärtsilä is not only the leading supplier of such equipment, but is also able to provide all the technical and installation support needed. The co-operation between our companies is first class, and because of this we can provide the service that the industry demands, ” says Mr Jae-Su Kim, Technical Manager of Initial Design Department of Shipbuilding Division of Hyundai Heavy Ind Co., Ltd.

“Wärtsilä is committed to working with its customers to find the right environmental performance solution according to their specific operational profiles. We are also committed to working closely with the shipbuilding industry to develop the necessary installation expertise, and HHI has been very successful in developing its capabilities in this respect, ” says Mr Sigurd Jenssen, Director, Exhaust Gas Cleaning, Wärtsilä Ship Power.

Wärtsilä is the global leader in marine exhaust gas cleaning technology, and has the industry’s most complete service support network. At the same time, HHI has become established as the world’s leading shipyard for the installation of exhaust gas cleaning systems for newbuild vessels. Because of the relatively recent introduction of this technology for marine applications, the supplier’s technical expertise and co-operation with the yard is essential for the installation to be successful.

The Wärtsilä systems already delivered to two Solvang vessels involved two scrubber systems; one for the main engine and one integrated exhaust gas cleaning unit for the three auxiliary engines. It was the world’s first vessel of this kind with exhaust gas cleaning systems installed for all engines onboard.

This latest order from Wilh. Wilhelmsen follows a similar contract in 2012, which involved the retrofitting of Wärtsilä Exhaust Gas Cleaning Systems to the MV Tarago. The success of that project has been cited as an important factor in the decision to fit the Wärtsilä systems to these new vessels. A third party measurement and verification programme, partly funded by the Research Council of Norway, will be carried out during the next two and a half years. This is expected to further endorse the viability of exhaust gas cleaning as an efficient and cost effective means of achieving Emission Control Area compliance.

The Wärtsilä exhaust gas cleaning technology will enable these ships to fully comply with International Maritime Organization (IMO) and European Commission regulations governing sulphur oxide (SOx) emissions. In particular, the vessels will be able to use the Panama Canal and to operate in the United States Caribbean Sea Emissions Control Area, which includes the waters adjacent to Puerto Rico and the U.S. Virgin Islands. This is particularly important for the Wilhelmsen vessels that operate regularly in this area.

Wärtsilä was the first manufacturer to have been awarded the IMO certificate for exhaust gas cleaning systems by the classification societies Det Norske Veritas, Germanischer Lloyd, and Bureau Veritas.

As of March 2014, Wärtsilä has 45 vessels contracted for a total of 94 exhaust gas cleaning systems for both new building and retrofit projects.

Wärtsilä in brief
Wärtsilä is a global leader in complete lifecycle power solutions for the marine and energy markets. By emphasising technological innovation and total efficiency, Wärtsilä maximises the environmental and economic performance of the vessels and power plants of its customers. In 2013, Wärtsilä’s net sales totalled EUR 4.7 billion with approximately 18, 700 employees. The company has operations in more than 200 locations in nearly 70 countries around the world. Wärtsilä is listed on the NASDAQ OMX Helsinki, Finland.
www.wartsila.com