On with the show!

On with the show! Three painters steeped in stagecraft exhibit at Southfields Gallery,  By James Brewer

The curtain has risen on the latest exhibition at Southfields Gallery in Wimbledon, featuring three artists widely experienced in designing for theatres.

Taking a bow are Bobby Jessamine, Tim Feltham and Colin Veitch, who are showing their skills in themes ranging from city scenes  of London to nature and boating. While there is little overt reference in the display to the world of stage drama, it is clear that the influence of their years in theatre-land has honed their skills. 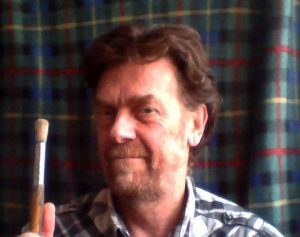 One of the three in the spotlight is Bobby Jessamine, a Glasgow native whose passion for art began early. After completing his fine art studies at Glasgow School of Art he took a postgraduate design course at London College of Furniture. This encouraged him to pan across projects including inflatable sculpture for the Jules Baker Monster show, scenic design for a kids’ centre, window display backdrops for retail groups and art festival design.

In the late 1970s, Bobby worked with Pemberton Studios designing and making film sets, and for Matchbox Productions and others. In 1979 he moved to Nottingham Theatre as head of props joining in the following year the Churchill Theatre in Bromley as scenic artist.  From 1985-90 he freelanced as a painter and scenic artist for theatres and events including Derby Playhouse and Chichester Festival, and designed and crafted exhibits for museums.

In 1990 he moved to Southport Little Theatre as senior scenic artist, and in his workshop and studio there, he concentrates on commercial design for theme parks, sets for photographic shoots and backdrops for educational and corporate events.

He is comfortable working with many mediums, from paint to plaster and synthetics, and he has constructed 3D pieces. 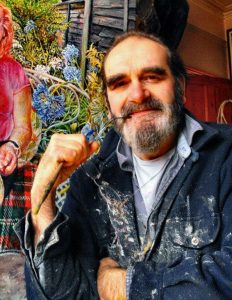 His versatility is demonstrated by work ranging from a scene of Strawberry Pickers, in thick oil on canvas, to an Embankment view in pencil, ink and wash, to a charcoal scene of Waterloo, and a sultry image in oil on board of Latin dancers. An example of his drawing on paper is Building a City.

It was at Bromley’s Churchill Theatre that Tim Feltham met Bobby Jessamine, who ‘set him loose’ to work on stage sets. The theatre commissioned caricatures by Tim for the foyers, and his paintings were shown elsewhere in bars, cafes and restaurants and theatres. 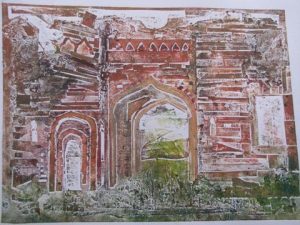 Formative influences on Beckenham-born Tim included Spike Milligan, cartoonist Giles and the great illustrators of books, notably EH Shepard who is famed for his work for The Wind in the Willows and Winnie-the-Pooh. Under the guidance of the esteemed Owen Frampton, Tim completed the foundation course in art at Croydon College of Art and went on to graduate in 1976. 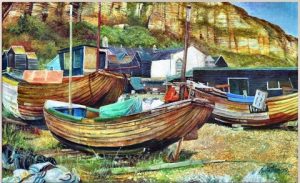 Boats on the Beach, Hastings. Oil on canvas. By Tim Feltham.

His theatre interests continue to be reflected in works such as his acrylics Rock ‘N’ Roll Will Never Die and Peter O’Toole as Jeffrey Barnard,  while the artist picked up his oils to present Boats on the Beach at Hastings.

The Churchill Theatre connection extends to the third artist featured here, Colin Veitch. He qualified with a degree in theatre, television and costume design and after working in various theatres joined the BBC as  ‘a change of scene.’ He returned to the Yvonne Arnaud in Guildford followed by the Churchill in Bromley, and there was a stint at the National Theatre under the direction of Sir Peter Hall. 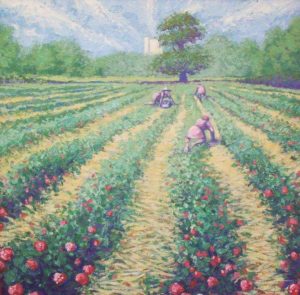 Colin worked for a prop hire company, furnishing feature films and television programmes, and was represented in group exhibitions and art fairs in and around London, including the Royal Academy summer exhibition.

He was registrar of the British Council contemporary art collection based at Portland Place, and when that post ended in 1995, switched to a large London retail group as social events organiser, creating imaginative corporate events in the UK and abroad.

Since retiring in 2013, he has expanded his studio in Bedfordshire, and has embarked on courses in print making. His artwork includes collagraphs (a collage printmaking technique), monotypes, aquatint, drypoint, screenprints and engraving.

Current form indicates that this trio of artists will continue to play ‘for an enthusiastic house’ for many years ahead.

Rock ‘n’ Roll Will Never Die. Acrylic on board. By Tim Feltham.

Southfields Gallery has built a reputation as one of the liveliest exhibition venues in the south of the capital, providing a platform for artists associated with the area in addition to those of international origin and standing. The format is usually one of group shows.

The gallery has won substantial support from local businesses, who see it as a flagship for cultural diversity in the London borough of Merton. It is located but a few paces from Southfields underground station on the District Line, and is little more than 10 minutes’ walk from Wimbledon Campionship Tennis Courts. Its shows cover a huge variety of contemporary arts and media including painting, prints, photography, sculpture and ceramics, and on occasion workshops are offered for aspiring amateurs. 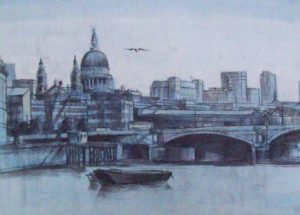