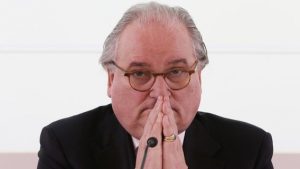 HAMBURG/KIEL In 2013 HSH Nordbank made gratifying progress in operating terms as a “Bank for entrepreneurs” above all in its business with corporate and real estate clients while at the same time improving its capital ratios. As expected, high loan loss provisions resulting from the difficult situation on the shipping markets as well as substantial expendi-ture for the guarantee provided by the federal states of Hamburg and Schleswig-Holstein led to a loss in the nine-digit range. HSH Nordbank plans to return to profit territory in 2014 as a whole and the start to the year looks promising: the Bank projects a pre-tax profit of EUR 200 million in the first quarter.

Since the introduction of its “Bank for entrepreneurs” business model in 2011 HSH Nord-bank has bolstered its position in northern Germany and gained new clients above all in central and southern Germany. Despite the extremely subdued demand for loans from Ger-man companies, the Bank increased the amount of new business by 12 percent to around EUR 7.6 billion in 2013 (previous year: EUR 6.8 billion) – with gratifying rates of increase of up to 30 percent among corporate and real estate clients. In addition to this, it made consid-erable headway in reducing the legacy assets mainly pooled in the Restructuring Unit. The Bank‟s total assets contracted in the course of 2013 to EUR 109 billion from EUR 131 billion at the end of 2012. The concomitant decrease in risk-weighted assets and the second loss guarantee provided by the federal states of Hamburg and Schleswig-Holstein, which had been replenished to EUR 10 billion in mid-2013, resulted in an improvement in the common equity Tier 1 capital ratio to 11.7 percent (previous year: 9.9 percent), plus a buffer of 5.2 percentage points.

As a result of the latest trends in international shipping, in the fourth quarter of 2013 HSH Nordbank adjusted its market assessment for the sector. This was connected with a further significant increase in loan loss provisions in the final quarter of 2013 and the prospect of a slightly larger expected drawdown of the federal states‟ guarantee. HSH Nordbank still ex-pects to draw on the guarantee for the first time in 2019 with a total of EUR 1.6 billion budg-eted for the years from 2019 to 2025, up from the previous EUR 1.3 billion.

The positive trend with profits in the Core Bank displayed for more than a year was over-shadowed by the higher loan loss provisions at yearend. Adjusted for special items, the Core Bank posted a profit before taxes of EUR 82 million (previous year: EUR 101 million) while the Restructuring Unit recorded a loss of EUR 211 million. (previous year: EUR -52 million). The result of the Bank as a whole was further encumbered by higher than expected costs for the replenished guarantee and provisions in connection with a change in the risk assessment of taxes. In its pre-tax result the Bank posted a loss in line with its long-term forecast of EUR -563 million (previous year: EUR -185 million), including expenditure of EUR -902 million for the federal states‟ guarantee. After taxes, the Group net loss climbed to EUR -814 million (previous year EUR -124 million) due to tax provisions.
Encouraging start to the year – profits forecast for 2014

“We made a good start to 2014. The Core Bank will do well on the market and make a solid profit in 2014. This will come principally from corporate and real estate clients. We are resolutely reducing the legacy encumbrances in the Restructuring Unit. HSH Nordbank as a whole is becoming more efficient and effective and is back in profit territory, ” said Constantin von Oesterreich, Chairman of the Management Board of HSH Nordbank.

According to today‟s forecast, starting 2014 loan loss provisioning requirements will de-crease again for the first time in years. The Management Board projects a clear profit before and after taxes both for the Group and for the Core Bank in 2014. Contributory factors here will be further progress made in operations and a lower burden from guarantee expenditure. Apart from this, the Group net result benefits from substantial income in connection with the so-called capital protection clause. This mechanism was installed at the behest of the EU Commission and guarantees a solid common equity Tier 1 capital ratio for HSH Nordbank according to Basel III. As early as the first quarter of 2014 this capital protection clause had a positive impact on earnings. From today‟s perspective, the Bank therefore projects a pre-tax profit of around EUR 200 million for the first quarter of 2014.

This result is supported by lower loan loss provisions, a perceptible reduction in costs and a gratifying trend in new business. In the first three months of 2014 new business picked up noticeably in all segments – in total the Bank doubled the amount to almost EUR 2.1 billion, up from EUR 1.1 billion in the previous year. For this year HSH Nordbank expects positive contributions to net income from all segments, especially from the Corporates and Real Estate Clients divisions. All in all, the Bank is targeting an increase in new business of a just under 25 percent to more than EUR 9 billion.

At EUR 104 million, net commission income was marginally down on the previous year‟s figure of EUR 119 million. This reflected the disappearance of commission income resulting from the Bank‟s focus on its core business. Accordingly, the Restructuring Unit accounted for most of the decrease. In addition to this, higher expenses for capital market transactions and the restrained demand for interest-hedging products due to the low inter-est rates also weighed on net commission income.
Net trading income improved significantly to EUR 189 million as compared to EUR -238 million in the previous year. The main contributory factors here were lower charges from the valuation of interest rate / currency derivatives (EUR/USD basis swaps) used for funding forex transactions and the positive effect of reducing counterparty risks in the derivatives segment. Charges from the valuation of the Bank‟s own liabilities at their fair value also decreased. Moreover risk-prone securities portfolios benefited noticeably from the brighter setting on the financial markets, above all in the Credit Investment Portfolio (CIP), managed by the Restructuring Unit. These CIP benefits were evident both in the net income from trading and net income from financial investments, which likewise rose significantly year-on-year by EUR 53 million to EUR 276 million.

Apart from the guarantee costs charged to the income statement, which are recorded in loan loss provisions, last year expenses for public-sector guarantees rose to EUR -414 million. The reasons for this are higher ongoing guarantee fees resulting from the replenishment of the guarantee facility from EUR 7 to 10 billion as well as the resulting subsequent pro rata payment of the basic premium amounting to some EUR -69 million. The previous year‟s figure of EUR -302 million contained fees of EUR -18 million for the SoFFin guarantees, which the Bank had given back in full by 2012.

Expenses to date for the second loss guarantee
The 2013 financial statements contain all expenditure for the guarantee provided by the
federal states amounting to EUR -902 million. Since April 2009 the Bank has thus recognised
total premium expenditure of around EUR 3.6 billion for provision of the second loss
guarantee in the income statement, meaning that HSH Nordbank has made a significant
contribution towards offsetting the aid received from its own shareholding federal states.

Further decline in costs
All in all, the Bank reduced administrative expenses by eleven percent, from EUR -821
million to EUR -732 million. Personnel expenses, which fell from EUR -357 million to
EUR -327 million, were affected above all by the reduced number of employees. The number
of full-time equivalents in the Group declined by a further 289 to 2, 834 compared to the
end of 2012. Operating expenses including depreciation fell by 13 percent to EUR -405
million from EUR -464 million – in spite of higher expenditure for regulatory requirements.
Total assets significantly reduced – common equity Tier 1 capital ratio
16.9 percent

“Thanks to the relief resulting from the second loss guarantee for our risk-weighted assets
we are well equipped for the Basel III rules coming into effect as of 2014 and for the changeover
from calculating capital ratios according to German GAAP to IFRS rules. At the same
time this provides us with a reliable basis for future challenges. In combination with the
visible progress made by the “Bank for entrepreneurs”, we are assuming that the replenishment
of our guarantee facility provisionally approved in June 2013 will also be finally
authorised by the EU Commission and that we will be able to successfully complete the
conversion of HSH Nordbank into a stable and sustainably profitable Bank, “ said Constantin
von Oesterreich, Chairman of the Management Board of HSH Nordbank.

During 2013 the Bank continued to wind down its risk positions and considerably reduced
total assets to EUR 109 billion (previous year: EUR 131 billion). The total assets of the
Restructuring Unit, in which mainly the Bank‟s risk-prone legacy assets are wound down,
decreased, excluding consolidation items by EUR 3 billion, to EUR 37 billion from EUR 50
billion in the previous year. As at 31 December 2013 the Core Bank recorded total assets of
EUR 69 billion (previous year: EUR 79 billion). Notable aspects here were repayments in
the shipping segment, a contracting derivatives portfolio and sales of securities.

The continued reduction of total assets and the second loss guarantee provided by the fed-eral states, replenished to EUR 10 billion mid-year, resulted in a significant improvement in the Bank‟s capital ratios. Its common equity Tier 1 capital ratio increased sharply as at yearend 2013 to 11.7 percent, plus a buffer of 5.2 percentage points from the guarantors‟ potential debt waiver from the additional premium, which was eligible as a „Besserungss-chein‟ (capital protection clause). Including the buffer, the common equity Tier 1 capital ratio thus amounted to 16.9 percent, significantly in excess of the minimum requirements set by the banking regulatory authority and at the same time well up on the figure of 9.9 percent at the end of 2012. The other capital ratios also improved on those of 2012.