In the works of a remarkable artist, Julien Sinzogan, ships of shame return to the West African ports where they collected their wretched human cargoes for the slave trade. The artist’s richly-detailed works in coloured inks and acrylics see the prison hulks beset by an unexpected fate: spellbound in thrall to the resurgent spirits of the erstwhile victims.

Born in Porto Novo, Benin, one of the formerly notorious ports for embarking captured villagers from many parts of Africa, Julien Sinzogan is among 23 artists with representative work in an exhibition to celebrate the 35th anniversary of the innovative October Gallery, in the West End of London. 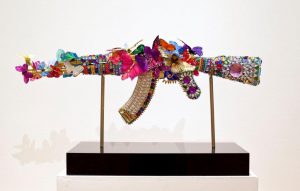 Seizing on the intricate configuration of the galleons, the artist seeks to turn on its head the appalling 400-year history of transatlantic slaving, which was initiated by Portugal, and taken up by Spain, England and other mercantile nations. Eventually more than 11m men, women and children were shipped out of West Africa, mainly from Benin, Nigeria and Cameroon. Of these, about 1.5m died on the dreadful, crammed voyages across the Atlantic. African rulers bore a share of blame: they were complicit by selling the dispossessed  who were the spoils of inter-tribal wars.

Julien’s oeuvre reflects the intensity of the trade, as the deracinated masses flock back to their lands articulated as spirits and gods, sometimes flying above the earth, sometimes as rowers of small boats in the lee of galleons flying sails of fantastic fabrics.

October Gallery shows one of Julien’s most dramatic images in this series of resilience and triumph. A 2013 work of Indian ink and acrylic on paper with the title Désenchaînement2,   is breathtaking in its pin-sharp observation, enmeshing the viewer in claustrophobic ships’ rigging and at the same time in the grand sweep of the subject. What is most important in this imposing caravan is the presence of ancestor spirits, sometimes wearing richly embroidered cloaks, in a confident return to the ports and villages to claim the inheritance that was appropriated. The ships themselves are now under sway of the religious symbolism of the Yoruba people of Benin and Nigeria. Hope of rebirth transcends despair.

Electrifying the whole is sacred voodoo dance, while swoops of sea-birds picked out in negative white reinforce the presence of spirits. Without doubt, Julien Sinzogan is a fine draughtsman – the skill was instilled in him during his architecture studies in Paris, and developing expertise in computer imagery .

A fellow native of Porto Novo in Benin, the redoubtable Romuald Hazoumè, is showing three of his ‘found objects’ compositions based on discarded jerry cans – a metaphor for the contraband trade in fuel – including an Afro-wigged ‘beauty, ’ entitled Miss France. As documented in our pages recently, Romuald’s purpose is deadly serious: to underline the scandal of poverty and cheap labour, the successor blights to the crude slavery of yore, in his country.

Entering the gallery, we are confronted by another source of murderous force, a Kalashnikov  – or rather its shape modelled as one of the bejewelled sculptures of Gaza-born Laila Shawa who lives and works in London. Laila is a crack shot when she takes aim at injustice and persecution armed with this make of automatic rifle that has been deployed for more than six decades in countless nefarious and brutal ways. The Palestinian artist makes use of Swarovski crystals and rhinestones in her construction to impart a sickly-sweet aura to this weapon of crass destruction. 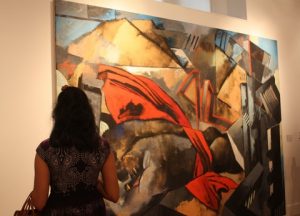 A guest at the private view admires the oil painting “Unbound”, by Elisabeth Lalouschek.

An early member of the London-based Caribbean Artists Movement, Aubrey Williams, who was born in Guyana in 1926 and died in 1990, is represented, with an abstract expressionist offering based in one of Dmitri Shostakovich’s most intense works, Symphony No 10. This artist cast deep into the past for inspiration from the Olmec and Maya traditions, lived for a time among the Warrau people of the forests of his country, and took stock of the 20th century giants including Jackson Pollock, Arshile Gorky, Diego Rivera, Yves Klein and Rufino Tamayo. This mix of influences sits well with the October Gallery’s vocation.

Led by director Chili Hawes and artistic director Elisabeth Lalouschek, October Gallery opened its doors with the motto, ‘artists from around the planet: intelligence, intuition and action, ‘ and coined the term Transvangarde, to reflect the trans-cultural avant-garde. The basis of its mission is “to explore the capacity of art to transcend boundaries, and to exhibit the work of artists who were implementing new creative strategies across the globe.” 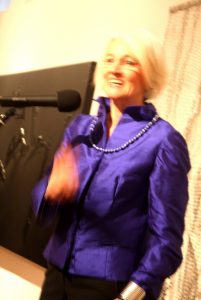 The gallery’s name October is a reference to revolution, and “to the time of the year when many things turn gold.”

At the private view evening, Ms Hawes spoke of the “alchemy” of those who produce art that “makes you understand yourself and all of the world around us.”

She said that the gallery was a stage in the centre of London where artists and audiences alike participated in what Brion Gysin [a controversial painter and Beat Generation mystic] called The Third Mind. 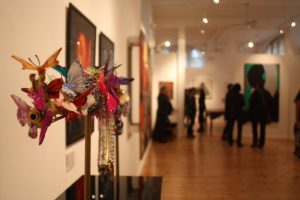 35 Years of Transvangarde: Contemporary art from around the planet, runs until May 3 2014. October Gallery, 24 Old Gloucester Street, London WC1. More details at www.octobergallery.co.uk