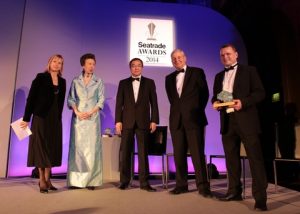 Intersleek®1100SR delivers macro and micro fouling control with improved static resistance, even in warm waters and is suitable for slow steaming. The movement of the ship through water can release slime that builds up during static periods. As a result, vessels can achieve reduced drag, improved fuel efficiency and reduced CO2 emissions.

The 26th Seatrade Awards Ceremony Dinner was attended by HRH The Princess Royal at Guildhall last night, and rewards innovative solutions for safe, efficient and environmental operation, in keeping with the goals and objectives of the International Maritime Organisation. An independent and influential panel of top industry executives, including Mr. Koji Sekimizu, Secretary-General of the IMO, judged the entries.

The Clean Shipping category was sponsored by classification society ABS and celebrates new, or significant improvements of existing technology, which help to create a cleaner shipping industry. Previous winners have included W R Energy and TecnoVeritas.

Trevor Solomon, Intersleek Business Manager, who accepted the award on behalf of the company, said: “At today’s bunker prices, the effects of slime potentially costs the shipping industry 44 million extra tonnes of bunker fuel, $28.6 billion in additional fuel costs and an extra 134 million tonnes of CO2 emissions every year*. It is a key issue that impacts every ship owner and operator.

The development of Intersleek®1100SR is therefore a significant milestone for us and we are very pleased that this has been recognised by the industry. Learning from earlier generations of the technology, the tailored surface chemistry of the latest product specifically influences and resists the adhesion and settlement of organisms that make up slime colonisation.”

The introduction of Intersleek®1100SR builds upon the company’s long history of fouling release development. In 1996, it launched the first and original silicone based Intersleek®425 for fast craft. In 1999, Intersleek®700 silicone technology was introduced to bring foul release to deep-sea scheduled vessels. In 2007, the introduction of Intersleek®900, the original biocide-free foul release product based on fluoropolymer technology, meant that foul release was available for all vessels above 10 knots. Intersleek®1100SR, the newest addition to the range, has become the first ever fluoropolymer slime release coating for all vessels. With over 1, 600 individual applications, Intersleek® has the largest foul release track record within the industry.