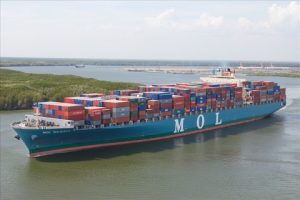 The award is aimed at heightening awareness of the need to protect harbors and the marine environment through safe operation of oceangoing vessels and was first awarded in 2003. The awards are commended to “vessels considered superior by pilots” by JFPA.

For FY2013 awards, seven vessels were selected from among ships that requested pilots at pilotage districts throughout Japan in September and October. Among the seven, four were operated and managed by MOL, as proof of appropriate cooperation with pilots by the captains and crew members of the vessels, and of their high level of onboard equipment and boarding/disembarking facilities.

As MOL forges ahead to become the world leader in safe operation, MOL continues striving to contribute to marine safety and conservation of the global environment, as a synergistically, sustainably growing in harmony with society.

*JFPA, whose precursor was the Japan Pilots Association, was founded by 35 of Japan’s pilot associations in 2007 when the piloting law was revised.