All At Sea: marine and coastal vistas shimmer in group exhibition at Store Street Gallery

All At Sea: marine and coastal vistas shimmer in group exhibition at Store Street Gallery, Bloomsbury,  By James Brewer

Londoners often suppose that they live far from the open sea, notwithstanding the city’s historic proximity to bustling trade lanes, and its prominence in supplying maritime services of all kinds.

To counter that impression, Yolanda Cruz-Suarez, manager of Store Street Gallery in one of Bloomsbury’s most pleasant streets (one with an intensely urban vibe) and her colleagues decided it was time to “bring the sea” to the West End.

The result is the engrossing exhibition All At Sea, in which five experienced painters stretch their sea legs. Marine-influenced works in a vivacious variety of media are interspersed with perky, quirky, non-marine sculptures of modest dimensions, which combine in a rounded array of talent. 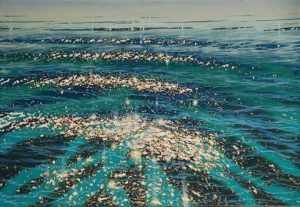 The gallery, which has put on consistently brilliant shows, is hosting this collection of marine and coastal vistas until May 10 2014. Throughout, we are disabused of any notion that the sea is blue: it is much more a hostage to the coloration of the sky and the shoreline, and to the vagaries of weather.

Wild and mighty, but lyrical – that is the essence captured by these artists, of the expanse that covers two thirds of the surface of the earth. 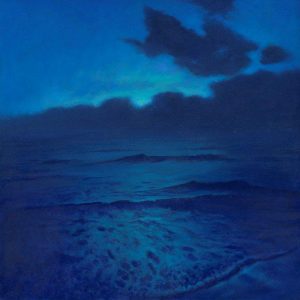 One of those breaking upon the shores of imagination is Russell Frampton, whose work has begun to shade from his oil-on-board nautical paintings into the sculptural, as he makes use of material dug from his subject matter: his Sea Journal II is one of two triptych works here that are painted on to what looks like driftwood. Abstract shapes put the viewer in mind of the weathered hull of a ship.

Russell had an early affinity with matters marine: ”Nautical and maritime themes have often resurfaced in my work mainly because of associations with my childhood, being brought up on the River Hamble within a stone’s throw from the busy international shipping port of Southampton, ” he says. “The Solent and Cowes as seen from Warsash were formative landscape memories, and the regular passage of tankers, passenger ships, ferries and yachts etched a painterly structure into me.” 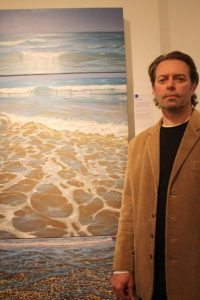 Theo Platt eschews ships – at least for the present – to concentrate on wave-scapes. He is most familiar with the crash of the sea at Saint-Jean-Cap-Ferrat on the French Riviera, but he modelled his shimmering Surf Triptych on a visit to Sagres, one of the few unspoilt resorts of the Algarve, and its rugged cliffs. Theo has two sides to his career as a painter: his Ocean series of works, and portraits for which he has had commissions from members of the Royal family, the Deputy Prime Minister, the Lord Chancellor, and the Chief of Defence Staff.  He observes: “The two most difficult subjects to paint are people – and the sea.”

Theo recalls that the first time he ever painted he included a ship – a galleon – but ships have been absent from his canvases since then. “I think one day I shall go back to painting ships, ” he muses.

Mark Harrison, based in Brighton, paces the seafront sizing up the light, and the effect of night. In a dusk scene displayed in the exhibition, the sky blazes red and bathes all but the beach-huts in that hue. That oil painting is called Here comes the Night. 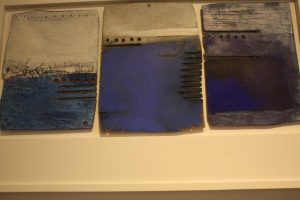 Forests, landscapes and seascapes form the core of the work of Claire Wiltsher – with the elements often on the brink of transforming what is pictured into new moods and colours. Claire casts new light figuratively and spiritually on her restless seas, adding fragments of collage to the dashes of pigment. Rising demand for her painting in the last five years led to her giving up her part-time job as an art lecturer to become a professional artist. In 2010 she received the ‘Rosemary and Co’ Society of Women Artists annual award and was the same year was selected for the Royal Society of Marine Artists exhibition at the Mall Galleries. 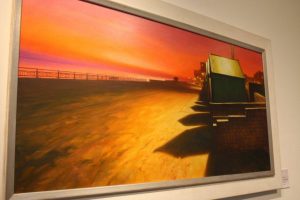 Lorna Holdcroft too takes inspiration from dramatic manifestations of the sea, in her case often a short distance from home. A blaze of colour dominates her depiction of Seaford Head, in East Sussex, a cliff that in February 2014 suffered a partial collapse caused by tidal surges that also eroded its beach. In Lorna’s painting the cliff seems but a fragile defence against the sea. 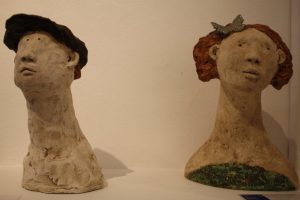 All at Sea: Marine and Coastal vistas is at Store Street Gallery, 32 Store Street, London, WC1, until May 10 2014. www.storestreetgallery.com