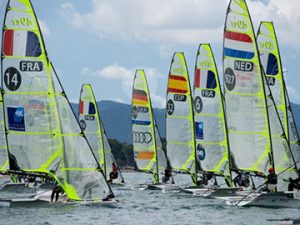 Sunday 20 April 2014 – The boat parks at ISAF Sailing World Cup Hyères were bustling with anticipation as over 1, 100 sailors from 61 nations fine-tuned their equipment ahead of racing which starts on Monday 21 April.

The largest contingent of racers in Hyères is the 130-boat Laser fleet. All of the top 25 Laser sailors in the ISAF World Rankings are set to compete in what could resemble a dress rehearsal for the ISAF Sailing World Championships in Santander, Spain this September.

With the world’s finest rigged and ready Robert Scheidt (BRA) pointed out the importance of the event, “It’s one of the biggest regattas of the year, ” explained the 2013 Laser World Champion. “Everybody is here, all of the top guys. It’s really tough racing in a good fleet. If you make a little mistake in a race then you’ll be fighting for a 15th place. The level has gone higher and higher and I’ve just got to focus on racing really well.

“It’s usually good sailing in Hyères and I’m looking forward to it. I’ve had a good time to recover after Palma. It looks like the breeze is not going to be that strong over the week so we will see, I will do my best.”

Scheidt held the lead at ISAF Sailing World Cup Mallorca at the midway point but after a scoring penalty he slipped out of contention. The Medal Race saw Tom Burton (AUS) take the bull by the horns as he took an early lead that he maintained through to the finish, resulting in Australian gold.

World #2 Burton comes into Hyères as the 2013 champion and ISAF Sailing World Cup Melbourne and Mallorca gold medallist and like Scheidt knows the going won’t be easy, “All of the top guys are here and it’s going to be another tough week, ” said Burton. “I think going from Palma, Robert [Scheidt] and Tonci [Stipanovic] are two of the on-form guys. Pavlos [Kontides] as well showed in Palma he can really turn it on. The New Zealanders, the Dutch as well and there’s a string of guys who will be at the top.”

Burton took a hard fought gold in 2013 and will be aiming to make things a little easier in the 2014 edition, “I won here last year coming from a big come back where the format helped me out and I had another big comeback in Palma last week so I’ll be hoping to lead from the front here.

“It hasn’t been too long since Palma and we had a little bit of time off just working back up to this week and hopefully it will be a good one.”

Competition in the Laser Radial will be equally tough with all of the victors from the 2013-2014 ISAF Sailing World Cup series registered to race. Qingdao victor Dongshuang Zhang (CHN), Melbourne gold medallist Tatiana Drozdovskaya (BLR), Miami conquerer Paige Railey (USA) and emphatic Mallorca winner Marit Bouwmeester (NED) will all sail in the fleet.

In the build-up to the London 2012 Olympic Sailing Competition the Australians and Kiwis were the front runners and will race each other for only the second time since 2012. Both teams pushed each other to their full potential at London 2012 resulting in Australian gold and Kiwi silver.

On the relationship Outteridge joked, “They were our training partners leading up to London and we like to think we taught them everything that we know and it looks as like we might have taught them too much.

“They had a great year last year – World Champions, European Champions and Palma this year. We’ve only got to race them once since the Olympics and we’ve had a lot of dust and rust about us. Hopefully we’ve done enough training over our summer.”

Amongst the ten Olympic and two Paralympic fleets racing in Hyères the camaraderie is strong off the water. That certainly is the case for the Australians and Kiwis but once the racing gets underway it’s a different story, “There’s no love lost, ” said a grinning Outteridge. “We’re friends basically up until two minutes before the start. Up until two minutes we’re having a chat and joking around and then you get racing and your game face comes on.”

On the face of it the Australians and Kiwis may be seen as favourites in Hyères but Outteridge was quick to recognise the strength of the fleet, “It’s not to be said there’s no other teams catching up to us. I’ve read a lot of stuff about how they think we’re the only two boats who can win any event and that’s far from the case.

“There are a lot of good sailors in the 49er class and I’m really looking forward to shaping up against them.”

Burling echoed Outteridge’s sentiments, “It’s always good to race good boats and that’s why we come to Europe and that’s what we’re here for. We’re looking forward to racing them [Outteridge and Jensen] but there’s plenty of other good boats out there and it’s always a good battle.”

Strength in the 49er fleet is evident throughout the fleet with many of the teams capable of taking gold when they hit top form.

All of the World #1 racers in the Men’s and Women’s 470, 49erFX, Finn, Nacra 17 and Men’s RS:X are set to race in world class fleets in Hyères. The Women’s RS:X also features a highly competitive field with London 2012 bronze medallist Zofia Klepacka (POL) making a return to action.

The 2.4mR has 16 registered sailors including ISAF Sailing World Cup Miami and Mallorca gold medallists Megan Pascoe (GBR) and Helena Lucas (GBR). The top six from the Sonar fleet at the London 2012 Paralympic Sailing Competition will take to the start line in Hyères with eight teams set to line up.

Fleets will be divided into gold and silver from Wednesday 23 April to the close of the regatta with only the 49er adding a third bronze fleet.

The Women’s 470, Finn and Women’s RS:X will sail a standard series whilst the Paralympic events, 2.4mR and Sonar, are scheduled for a ten race series concluding on Friday 25 April.

Racing commences at 11:00 local time on Monday 21 April across ten Olympic and two Paralympic events in Hyères, France. The Medal Races on Saturday 26 April will bring the regatta to a close.

All At Sea: marine and coastal vistas shimmer in group exhibition at Store Street Gallery