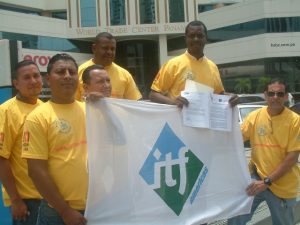 24 April 2014 – Thousands of workers at DHL Turkey made concrete gains after their employer signed a new agreement with the ITF-affiliated TUMTIS union earlier this week.

The agreement will provide social security for over 2000 workers, make 750 subcontracted employees into permanent workers, and regulated DHL’s use of subcontracting. According to TUMTIS president Kenan Ozturk, workers’ remuneration will increase by 32 to 46 percent, thanks to wage increases and bonus provisions in the agreement.

The international action day for DHL in December 2012 saw the ITF global family and its UNI colleagues take a range of actions – from sending campaign postcards to holding demonstrations at regional DHL headquarters.

As part of the strategic campaign, the ITF staged a protest at London fashion week in February 2013. This was followed up with international action on DHL families’ day, which targeted German embassies, and joint ITF and UNI global union action at DHL’s AGM.

Ingo Marowsky, ITF global head – supply chain and logistics, praised TUMTIS workers for their victory, but highlighted the years of employer resistance leading up to it. He emphasised that the ITF would continue to keep a watchful eye on DHL’s global industrial relations.

US$353 Million Jury Award in Texas