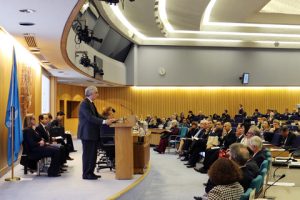 ”An array of legal measures, in particular the United Nations Convention on the Law of the Sea and the comprehensive portfolio of IMO treaty instruments, do an excellent job in defining the rights and privileges and, at the same time, the duties, obligations and responsibilities of nations in their use of the world’s seas and oceans. And, for these international legal measures to be effective, States, in their turn, need to enact appropriate domestic legislation to reflect their provisions and provide, thereby, a mechanism for implementation and enforcement. By providing a steady influx of highly trained legal professionals, IMLI has been instrumental in enabling this to happen, ” said Mr. Koji Sekimizu, IMO Secretary-General and Chairman of the IMLI Governing Board.

“IMLI graduates now occupy positions of great responsibility throughout the maritime world and their knowledge, expertise and influence has been of immense and tangible benefit, particularly for the developing world, and indeed for all the economies and communities that rely on the safe and secure passage of their goods across the seas and oceans, ” Mr. Sekimizu added.

The other speakers included:

IMLI was established by IMO in 1988 to help ensure that sufficient maritime law experts, with appropriate knowledge and skills, would be available, especially within developing countries, to assist in the implementation and enforcement of international maritime law and, more particularly, the vast body of rules and regulations developed under the aegis of the Organization. The first students enrolled at the Institution in 1989.

The IMLI programme consists of post-graduate education in all areas of international maritime law, including law of the sea, marine environmental law and shipping law. This course is mainly addressed to lawyers, legal advisers, judges and legal draftsmen and women whose duties encompass maritime issues and who are seeking specialisation. The institute also contributes to the development and dissemination of knowledge and expertise in international maritime law, with special reference to the international regulations and procedures for safety and efficiency of shipping and the prevention of marine pollution.

By the end of the 2012/2013 academic year, a total of 602 students from 126 States and territories worldwide had successfully graduated with the Institute’s degree of Master of Laws (LL.M.) in International Maritime Law.

The 2013/2014 academic year commenced on 28 October 2013 with an intake of 33 students from 25 States on the LL.M. programme. Israel, Kiribati and Portugal were represented for the first time.

Be on guard as enfolding world events might be detrimental…