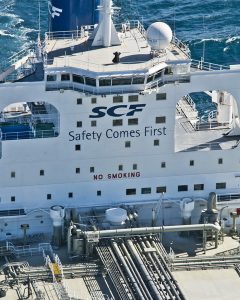 Mikhail Ulyanov, an ice-breaking shuttle tanker (ice class – ARC6) belonging to OAO Sovcomflot (SCF Group), has today been the subject of a Greenpeace protest, whilst at the Port of Rotterdam carrying a cargo of 67, 000 tonnes of crude oil, loaded on the continental shelf of the Pechora Sea, Russia.

The actions of Greenpeace have compromised a safe operating environment for the Mikhail Ulyanov, her crew and protesters themselves and exposed the involved parties to the useless and unreasonable risk.

“We are extremely disappointed that our vessel has been the subject of an irresponsible publicity stunt by Greenpeace, which occurred despite the measures taken by our ship and the port authorities, including the Coast Guard and the Marine Police. Mikhail Ulyanov is an ultra-modern high ice class shuttle tanker, with a technical specification above most of her peers, including conventional tankers transporting crude from oil-fields on the continental shelf of the North Sea. The actions of Greenpeace have caused unnecessary extra stress for the ship’s captain and potentially unsafe operating conditions for the vessel when manoeuvring in the restricted area of the port waters, and especially by the Greenpeace actions preventing the safe mooring of the tanker to the oil terminal.

Over many years Sovcomflot has built a reputation, within the international maritime community, for providing safe and reliable energy transportation for our clients across the globe. We put safety and quality operations at the heart of everything we do.“

“The actions of Greenpeace cause nothing but profound disappointment. As a Master I know that the actions of Greenpeace have needlessly distracted our highly professional crew from its normal work in an area of highly intensive shipping traffic. The crew of tanker Mikhail Ulyanov made its scheduled voyage from the point of loading in the Pechora Sea towards the discharge port of Rotterdam. At the entrance of the port and in the port during the process of mooring operations they were met by Greenpeace vessels. The actions of Greenpeace break the fundamental principles of international conventions for safety at sea as well as environmental safety.

My responsibility in manoeuvring in the confined waters of a port is no less dangerous than sailing in the Arctic, especially when another vessel is trying to interfere with a tanker transporting 67, 000 tonnes of crude oil in an area of high intensity shipping. During the process of final voyage and during the mooring operations to the terminal of the port, the Greenpeace vessel Rainbow Warrior deliberately tried to prevent the safe mooring of the vessel, putting herself between the hull of the tanker and the berth, risking their people and of the port.

From the seafarers’ point of view the inadequacy of their behaviour in marine waters is unprofessional and can only be explained by the desire to make an impression on the general public without thinking about the consequences”.

“Sovcomflot’s fleet is routinely surveyed by Lloyd’s Register (LR) and other members of the International Association of Classification Societies. This helps ensure that the fleet carries the necessary high standards of regulatory environmental and safety certification enabling international trading. Lloyds Register, which certifies the majority of the fleet, additionally certifies Sovcomflot to ISO quality standards including environmental protection and energy management.”

Currently the tanker Mikhail Ulyanov is safely moored at the terminal.

Tanker Mikhail Ulyanov
This unique Arctic shuttle tanker was specially designed to transport oil by sea from Russian offshore oil fields and constructed at Russia’s shipyards. The ship was built in accordance with the Rules of Dual Registry of the Russian Registry of Shipping and Lloyd’s Register. The vessel is a double acting ice-breaker, in that she can break ice when moving either ahead or astern. Her length is 257 metres, breadth moulded 34 metres and draft 14 metres.
The vessel is fitted with twin Azipod propulsion units (an electric propeller-ruder system with a 360 degree turning circle), a dynamic positioning system (DP), heli-deck and a bow loading facility adapted for Arctic operations. She is capable of working without icebreaker support during the winter navigation period in ice of up to 1.2 metres thickness.
Before her voyage, Sovcomflot performed extensive checks and completed final adjustments to all elements of Mikhail Ulyanov’s loading system. This work included: special training for crew members; practice loading drills and interaction with supply vessels; trial runs for the vessel approaching the platform in ice conditions, and other necessary preparation.

Sovcomflot Group (SCF) is Russia’s largest shipping company and a world leader in the maritime transportation of hydrocarbons as well as the servicing and support of offshore exploration and oil & gas production. The company’s fleet (owned & chartered) specialises in energy transportation from regions with challenging ice conditions and includes 158 vessels with a combined deadweight of over 12 million tonnes. A third of these vessels have a high ice class. Sovcomflot supports large-scale offshore energy projects in Russia and overseas, including: Sakhalin-I, Sakhalin-II, Varandey, Tangguh, Escobar and Peregrino. The company is registered in St .Petersburg and has representative offices in Moscow, Novorossiysk, Murmansk, Vladivostok, London, Limassol, Madrid, Singapore, Yuzhno-Sakhalinsk and Dubai. www.scf-group.ru

Blue MBA candidates enjoy a room with a fabulous view…