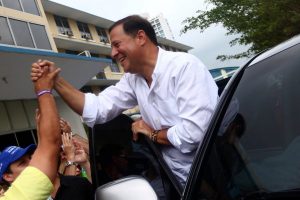 Panamanians, enjoying one of the fastest-growing economies in the hemisphere but wary of corruption and growing executive power, rejected the governing party’s choice for president on Sunday — on a ticket with the president’s wife for vice president — and instead hewed to tradition by electing an opposition candidate. (source: Frank Marmol)

Panama’s election commission declared the president-elect to be Juan Carlos Varela, who is vice president but broke with the governing party in a rancorous falling-out and was stripped of many of his duties. He captured 39 percent of the vote, with more than three-quarters of the ballots counted.

Mr. Varela, 50, an engineer and well-known politician whose family owns the country’s biggest liquor producer, was seven points ahead of the 32 percent won by the governing party candidate,  José Domingo Arias, a former housing minister and a political newcomer. A third major candidate,  Juan Carlos Navarro, a former two-time mayor of Panama City, had 28 percent.

Mr. Varela, who takes office on July 1 for a five-year term, campaigned against growing fears of corruption and the president’s iron fist-style of leadership. He promised a more transparent government that would maintain growth and popular social programs and fight inequality.

Mr. Varela’s victory was a rebuke to President Ricardo Martinelli, who oversaw years of rapid growth and defied electoral law by campaigning openly for Mr. Arias on a ticket that included his wife, Marta Linares de Martinelli, as the vice-presidential candidate. Opponents seized on the move as a thinly veiled attempt to hold on to and concentrate power.

It seemed Mr. Martinelli’s Democratic Change party had much to give it a sharp advantage: A newly opened subway line in Panama City, the first in Central America, and plans for an expansion. A new, if controversial, highway bypassing the city’s old quarter. A skyscraper forest in the capital reflecting the cash pouring in from corporations and wealthy immigrants. And a strong economy, with a $5.2 billion expansion of the Panama Canal that could accelerate it more.

But while Mr. Martinelli had approval ratings around 60 percent, the final round of polls showed Mr. Arias in a close race, with Mr. Varela in third place.

Voters formed long lines all day on Sunday, and there were few irregularities, said Jennifer L. McCoy, Americas director of the Carter Center, who observed the balloting. In one last-minute dirty trick she cited, fake editions of a major newspaper claimed that two candidates had withdrawn.

It was typical of the mudslinging in what political analysts had once expected would be the closest of the four presidential contests there since the United States invasion in 1989 toppled Manuel Noriega’s dictatorship. The Panama America newspaper reported that even Mr. Noriega had voted in the Panamanian prison where he is serving time for crimes during his reign.

Mr. Martinelli, 62, a supermarket magnate who shook up the political establishment five years ago as an outsider with a commanding win, could not seek another term. The choice of Mr. Arias, 50, led opponents to doubt that Mr. Martinelli would give up power if his party won.

Mr. Arias had sought to ride Mr. Martinelli’s popularity with promises to continue big public works and social programs, but he lacked the president’s flair for the dramatic and the blunt talk that endeared supporters and turned off opponents.

His wife’s presence on the ticket also had been questioned, as Panamanian law prohibits the sitting president’s blood relatives from seeking the country’s top two offices. It is unclear if the prohibition also applies to spouses.

“Her nomination, ” said Orlando J. Pérez, a political scientist at Central Michigan University who studies Panamanian politics, “evidences a desire by Martinelli to remain powerful after the elections.” .

Mr. Pérez, who was in Panama City for the election, said her candidacy could backfire, as Panamanian voters tend to fret over concentrations of power. The opposition has run strongly despite improvements in the country, including social programs aimed at helping older people, the poor and schoolchildren, because “the historic tendency in Panama is to vote for the opposition, ” he said.

“Every one of the previous four presidential elections since 1990 has been won by the opposition, ” Mr. Pérez said. Of Mr. Varela’s victory, he said, “this represents ‘Martinellismo’ without Martinelli — support for government programs while punishing Martinelli.”

Analysts said signs that the economy’s surge is slowing — it grew 8.4 percent last year after consecutive years of double-digit expansion — could have worried voters, who also are paying more for goods as inflation rises. Panama has wide income inequality, with more than a quarter of its four million people living in poverty. Crime remains a serious problem. Infrastructure problems, including traffic congestion, chronic urban flooding and power shortages, could also have worked against Mr. Arias.

Ruben Blades, the Panamanian salsa star and actor who ran unsuccessfully for president in 1994, posted a statement on his website declining to endorse any candidate but warning that electing Mr. Arias would constitute a re-election of Mr. Martinelli. He called that a “dangerous risk for Panamanian democracy.”

Mr. Varela had accused Mr. Martinelli and his sons of taking kickbacks in exchange for government contracts. Italian prosecutors are investigating whether the Italian defense firm Finmeccanica paid bribes to foreign governments, including Panama’s, but no Panamanian officials have been charged. Mr. Varela’s supporters suggested Mr. Martinelli put his wife up to running in part to ensure an Arias cabinet would not pursue any case against him.

Mr. Arias, in turn, accused Mr. Varela of being close to drug traffickers, a provocative charge in a country where Mr. Noriega was deposed to face charges in the United States of drug trafficking and money laundering. On Saturday, Mr. Varela found himself denying rumors that his American visa had been suspended, with a statement by the American Embassy backing him up.

A version of this article appears in print on May 5, 2014, on page A11 of the New York edition with the headline: Incumbent’s Party Loses Presidency in Panama.

We are glad to inform that Mrs. Vielka Oro de Torrijos was elected congresswoman of the Republic of Panama representing the Democratic Revolutionary Party (PRD) in the assembly of deputies for the next legislative period 2014-2019

Bringing broadband to small vessels with Fleet One

Trial by Media, trial by Law…