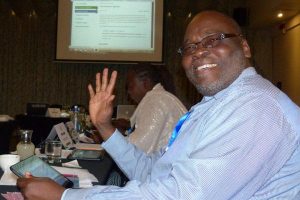 19 May 2014 – African affiliates have been getting to grips with congress technology ahead of the ITF’s first ever digital congress in Sofia, Bulgaria, this August.

Union representatives from Angola, Botswana, Kenya, Malawi, Mozambique, South Africa, Tanzania, Uganda and Zimbabwe gathered in Pretoria, South Africa, this week to apply for their Bulgarian visas. They used the opportunity to learn more about what happens over the six days, how they’ll be involved in decision making and setting the agenda for the next four years, how to prepare to be paper-free and to get the most out of the digital focus.

No congress documents will be printed this year. Instead all participants will be offered a tablet through which they can access the dedicated 2014 congress website to view and download documents, have their say and get involved in debate around key issues for transport workers.

Participation was the key message of the week, with attendees talking about how they plan to give a voice to Africa on the congress floor and via interaction online.

General secretary of host union the South African Transport and Allied Workers Union (SATAWU), Zenzo Mahlangu, said in his opening comments: “The key for Africa, for getting our voices heard is to go to congress and participate. If everything had already been done to support workers in Africa we wouldn’t need to go, but there is more to do and that’s why we will be in Sofia. We must make the most of the opportunity; congress will help us to pave the way forward for Africa.”

A number of participants signed up and were trained as participant reporters during the week. They’ll play a crucial role at congress, using the website to start debate, report live on what’s happening and represent their sector and the African region. If you’re going to congress you could be a participant reporter too! Find out more and hear first hand why Raul (Portuguese), Rose (Swahili) and Nicholas (English) signed up.