Safety-Quality Systems: Drawbacks or Beneficial for the Shipping Industry and the Economy 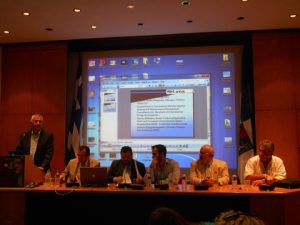 Earlier today at the University of Piraeus, a seminar took place on ‘Safety-Quality Systems: Drawbacks or Beneficial for the Shipping Industry and the Economy ’ organized by the Hellenic Association of Maritime Economists (HAME) within the frame of the second semester weekly lectures in University of Piraeus. Once again the maritime community alongside with students of the University of Piraeus and students and graduates of the Merchant Marine Academy attended the seminar. George P. Evgenidis reports:

As it was the final seminar of a successful cycle of seminars of the second semester in the University of Piraeus, the major organizer of the seminars, Prof. Costas Chlomoudis (Professor of University of Piraeus and Vice President of the Hellenic Association of Maritime Economists), opened the seminar with a reference to the indisputable success of the cycle.

The first lecture was given by Captain Vassilis Iliopoulos, focusing on the benefits of usage of the systems. Mr.Illiopoulos made a reference to the fact that maritime shipping is the safest industry in terms of amount of cargo transferred. He later stated that the reason such systems are installed is because more than 85% of accidents are caused by the factor ‘human error’. He also mentioned that by installing several systems, the cost and effort of the firm are being rewarded, since the firm has a certification and a lead from its competitors and it is very common for such firms to be preferred. He later claimed that safety and quality should be cultivated in the workplace and they are a long-term commitment. Mr.Illiopoulos gave his insight on the importance of continuous assessment since the requirements of the markets, in order to be competitive, change continuously and the ones who survive and prosper are the ones who comprehend quickly enough with the changes. Ending his talk Captain Vassilis Iliopoulos stated the importance of the public image of the firm with regards in attracting new collaborations.

Constantinos A. Karaindros gave his insight on the aim of the international regulations regarding maritime shipping and their contribution to the trade. Mr.Karaindros noted the fact that unless the ships are certified they cannot be insured. He later stated the importance of the requirements that the insurance companies set, since a ship that is not insured is set to economically fail. Mr.Karaindors made a reference to the upcoming over tonnage and its results in the market, since a smaller amount of ships are to be scrapped and more are to be built.

Marios Meletiou firstly distinguished the difference between security and safety. A security incident is intentional and is characterized as an unlawful or criminal act. A safety incident is caused by the human error and is described as ‘safety regulations and procedures not followed’. Although the reasons security and safety incidents are caused differ, their results tend to be the same and a few can be named as: 1) evacuation, 2)disruption, 3)injury, 4)risk of health. He later noted that despite the lines of the global trade, terrorism is borderless and timeless. Mr.Meletiou claimed that every player in the supply chain has to take responsibility and the responsibility should be shared between governments. Mr.Meletiou then stated the business benefits of a secure supply chain and the types of costs from the implantation of security measures as 1)direct cost(short-term and easy to be quantified) and 2)indirect cost which cannot always be accurately quantified. He later named a few types of possible benefits as 1) avoidance of costs due to prevention of assumed scenarios of security incidents, 2 )possible lower insurance costs, 3) financial benefits from the positive effect on the performance of operations. To end his talk Mr.Meletiou stated that since we cannot be 100% safe from risks we have to set and find the perfect balance point of ‘the acceptable level of risk’.

Ioannis Papagiannopoulos began his talk with a reference to a new type of terrorism aiming to destabilize the economy. Since 90% of global trade is carried by sea a reduction will result with an impact to national if not global levels. Mr.Papagiannopoulos noted the importance of The International Ship and Port Facility Security Code (ISPS Code) since the ISPS Code is a risk management tool.

Lloyd’s writes surplus lines in all US states

The Board of Oslo Børs approves Cxense for listing