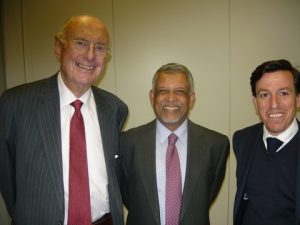 Bills of lading and trade finance fraud – widespread risks spelled out by Pottengal Mukundan of International Chamber of Commerce, in presentation to IMIF

Shipping, trading houses and banks are continuing to be targeted as victims of major fraud operations, a meeting of the International Maritime Industries Forum has been warned.

Criminals are using new tricks based on abuses of technology, Pottengal Mukundan, director of Commercial Crime Services at the International Chamber of Commerce, told the gathering, at the Baltic Exchange on May 7 2014.

“All documents in the trade finance bundle can be forged, and forged with ease, ” said Mr Mukundan, “such is the technology available.”

He stressed that although the vast majority of trade transactions were genuine, vulnerability will be exploited by those trying to manipulate the system. Crooks  ‘piggybacked’ on genuine trades, preparing documents based on information gleaned about legitimate operations. 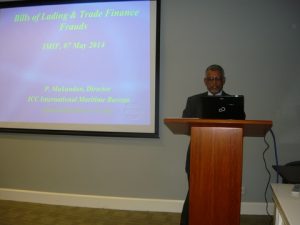 Mr Mukundan was delivering a wide-ranging presentation on the topic “Bills of lading and trade finance fraud.”

He said: “Fraud affects everyone in the shipping and trade chain. When it does happen, the victims can face very severe consequences which can cause some companies to go down completely, causing a problem for all their creditors and trading partners.”

The London-based Commercial Crime Services section of the International Chamber of Commerce, which is headquartered in Paris, works with banks, buyers, sellers and shipping companies pursuing specific cases, and researches the patterns and long-term trends in commercial crime.

One of the most serious and costly scams is gaining access to trade finance by means of false shipping documents including bills of lading.

The trade finance system is wide open to manipulation, said Mr Mukundan. It enables the transfer of large amounts of money from one part of the world to another, relying on a documentary trail. In the resulting shipment of goods, it is often difficult to know what is inside a particular container, and that is one of the big weaknesses of the system.

Sometimes goods were wrongly described in order to save a few thousand dollars in freight, but the consequences of that for the shipowner and the vessel could be immense. Cargoes were given innocuous names, and the shipowner had no idea what was going on board.

Mr Mukundan cited the disposal of contaminated waste. There were unscrupulous people who believe that using shipping containers is a great way to get rid of such waste which would be very expensive to process in any major economy. In one instance, containers were sent to Brazil with contents described in general terms as waste, but what they really contained was untreated hospital waste. The shipowner was fined a substantial sum, and had to pay for the containers to be taken back to the port of origin in Europe to be disposed of safely there. 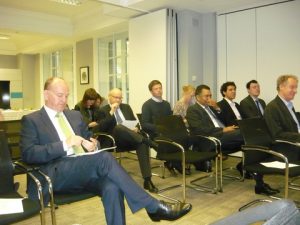 With counterfeiting being rife, there was a growing feeling among major brand owners that the transport chain is part of the problem. This had resulted in discussions in various quarters about the responsibilities of the shipowner, which could result in  “another burden for the poor shipowner to meet, ” said Mr Mukundan.

The ICC expert illustrated how genuine-looking bills of lading using respectable corporate names were used by fraudsters to give credibility to their schemes. By spoofing websites of carriers, criminals sought to make buyers confident that the payment they were making was for goods headed towards their port.

Mr Mukundan warned that superficial checks would not identify that a document aimed at securing trade finance was false. Even obvious give-aways could be missed: in one example, people checking the document failed to spot that the name of the carrier was spelled wrongly. Strict verification was the way that responsible banks dealt with the risks.

In another fraudulent bill, container numbers were listed that were false. Another deceit was to add zeroes to that the alleged value of the shipment.

Metal scrap was among commodities currently a high risk in terms of fraud.

Often, the victims look to the cargo insurance policy to recover such losses, but if the  goods do not exist the policy does not come into effect. A buyer would have no recourse to compensation.

One of the biggest cases involved losses of some $400m over the supposed trading of metal ingots, with 30 to 40 buyers and sellers, and 20 non-vessel owning common carriers with bills of lading issued over many years. Lead and tin ingots were fraudulently described in terms of increasing metal value. The CCS acted for a good number of banks which had been innocently financing spurious cargo.

In a separate series of steel frauds recently, criminals were getting money once from the bank and once from the owner of the cargo. 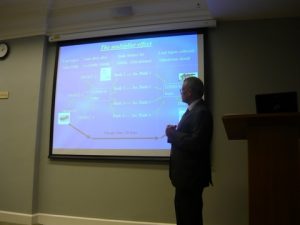 One of his best slides: “The multiplier effect”

Mr Mukundan spoke of suspicious deals involving loans, from non-banking institutions, dressed up as trade finance transactions. Sometimes these loans were termed ”structured trade letters of credit, ” which reminded one of “the collateralised debt obligations and other debt instruments of 2007-08 which led to the financial crash, transactions which have no intrinsic value.” Banks and others were now more aware of this.

Asked about the pressure on the shipping industry to switch to electronic bills of lading, Mr Mukundan said: “It is not the system which commits frauds, it is people, and that will not change with electronic systems. The nature of the fraud will change. It could well have far greater consequences than the paper frauds we see today.”

He referred to the trend for banks to outsource some work to centres where people checking the documents were not familiar with the client’s business and might fail to exercise the intuition that experienced document checkers close to the clients would have in detecting fraudulent documentation.

IMIF chairman Jim Davis wondered whether dealing with the problem was creating a mass of bureaucracy. Mr Mukundan replied that this was not necessarily the case if done properly. “The CCS uses its extensive network of contacts which enables timely and relevant information to be provided to traders and banks.”

Does anyone know where I can find a blank “Bill of Lading Form” to fill out?