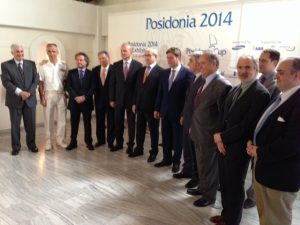 The Makers and Shakers off Greece’s Shipping Triumph

Posidonia 2014, the world’s most prestigious shipping exhibition, which opens next week at the Athens Metropolitan Expo, will be the biggest in the event’s long history with organisers confirming new records in terms of participant countries and exhibition size, and the conferences and seminars programme marking a significant growth compared to the 2012 event.
More than 1.800 exhibitors and some 19, 000 visitors from a record 93 countries and territories will attend Posidonia 2014, a tangible testament to the trademark event’s ever growing global appeal.
“We are happy to announce that this year’s Posidonia will be the greatest ever and we will try our best to optimise the experience for our exhibitors and visitors and make it as rewarding and as pleasant as possible”, said Theodore Vokos, Executive Director, Posidonia Exhibitions S.A, the organisers of the biennial event.
He added that shipping accounts for seven percent of Greece’s GDP while providing employment to 192, 000 people and that Posidonia is a significant factor for  the reputation of Greece, as well as a dynamic contributor to the local tourism industry, generating some €50 million for the community every other year.
George Gratsos, President of the Hellenic Chamber of Shipping, said: “Greek shipping welcomes the biggest ever Posidonia exhibition. Posidonia highlights the impressive achievements of the shipping industry, the shipbuilders who design and build the ships, the engine and equipment manufacturers that make them work efficiently and the port of Piraeus as the fastest growing Mediterranean’s transshipment hub. Posidonia shows how the private sector can better utilise resources, increasing efficiencies and productivity, producing wealth and employment better than any imaginable ideologically driven alternative”.
Theodore E. Veniamis, President, Union of Greek Shipowners, said: “Posidonia provides an opportunity to highlight the dynamics of the international shipping industry and the continuing leadership of Greek shipping. Perennial maritime tradition and seamanship coupled with advanced technology provide sustainable shipping services recognised internationally. As Greece is in the process of ending the most testing period in its modern history, economically and socially, Greek shipping could become a key driver of economic recovery at national level as well as in the context of global prosperity and welfare”.
John C. Lyras, Chairman of the Posidonia Coordinating Committee, added:  “Posidonia epitomises the continuing achievements of the illustrious Hellenic maritime tradition into modern times. This year it coincides with our country’s presidency of the EU, a telling and fitting coincidence for Europe’s premier maritime nation. Also because at last there appears to be light at the end of the tunnel for the sorely tried domestic economy, its citizens and institutions”.
Posidonia’s international appeal is reinforced by the fact that it is the national maritime exhibition of the Greek shipping community, which dominates global shipping with its ever expanding fleet currently standing at 3, 669 ocean going vessels over 1, 000 gt. Greek shipping is the worldwide leader representing 16.16% of the global fleet in dwt and 46.72% of the European fleet in gt.
With the Greek fleet’s ongoing expansion and modernisation strategy, shipping service and product providers from all sectors of the industry are queuing for some quality time in the company of  Greek shipowners who last year spent $13bn under their newbuilding programme, investing in more than 300 newbuildings.
The traditional shipbuilding powers of the Far East will field this June their biggest ever contingent of shipyards at any Posidonia show as they vie for precious networking moments with members of the Union of Greek Shipowners and a slice of their investment pie.
And they are not alone; from marine service providers to makers of electronics and software and from lubes and equipment suppliers to manufacturers of engines, bunkers and flag registries, every direct or indirect provider in the shipping supply chain will pay the customary biennial homage to the world’s largest and most renowned maritime trade fair.
They come from every corner of the world and this year in particular companies from the Gulf Cooperation Council (GCC) have registered a 200 percent increase with a large number of companies from the United Arab Emirates, Saudi Arabia, Qatar and Oman seeking investment and partnership opportunities in Greek shipping assets.
Once again, the biggest national participation belongs to China, followed by South Korea and Japan while this year Hong Kong is making a long-awaited comeback after a ten year absence, with Turkey returning after 2006 and Georgia making  its maiden appearance.
Posidonia has also unveiled details of its robust Conference & Seminars Programme during which government officials, industry analysts, bankers and financiers, shipowners and delegates will come together to debate emerging trends and provide insights into the industry’s future. Some of the hottest and most controversial  issues pertaining to the global shipping industry will be tabled during press conferences, workshops, roundtable discussions and seminars on issues ranging from future trends in vessel design, composite material, fuel emissions and bridge technology to injury and illness at sea, maritime risk management, energy savings and from eco-ship technologies to maritime communication.
Posidonia 2014 will also mark the launching of HEMEXPO (Hellenic Marine Equipment Manufacturers Association), which will promote Greek equipment manufacturers to shipyards around the world, and its first is goal is to include Greek manufacturers on the ‘Maker List’ of Korean shipyards.
Traditionally, networking opportunities during the Posidonia week extend to a rich social and sporting calendar and this year in particular some 800 exhibitors have already registered for the ‘Posidonia Games‘ sporting events, Posidonia Cup sailing regatta, Posidonia Shipsoccer Tournament and the Posidonia Golf Tournament.
Posidonia 2014 will be opened by Greek Prime Minister Antonis Samaras on June 2nd, before it officially opens to the public a few hours later.
Posidonia 2014 is sponsored by the Greek Ministry of Shipping, Maritime Affairs and the Aegean, the Municipality of Piraeus, the Hellenic Chamber of Shipping, the Union of Greek Shipowners, the Greek Shipping Co-operation Committee, the Hellenic Shortsea Shipowners’ Association and the Association of Passenger Shipping Companies.
Greece
0 comment
0
FacebookTwitterLinkedinEmail