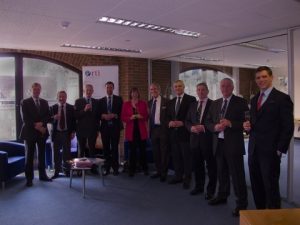 RTI was congratulated for its success and support to Private Maritime Security Companies (PMSCs), those PMSCs that have undertaken the ISO 28000 with ISO PAS 28007 process with RTI, received their certificates.

As part of RTI’s own certification efforts the company had been working with a number of leading international private maritime security providers. Having been audited as part of RTI’s pilot scheme process, these companies are now awarded ISO 28007 certification and have achieved success within the demands of this gold standard for the provision of protection on-board vessels.

Captain Alok Kumar, Director and Founder of Alphard Maritime says, “We are confident that the new ISO standard will place the certified PMSCs in higher class and will assist owners to choose the better PMSC.”

Captain Kumar’s views were echoed by Mr. John Howells, the UK Director for Alphard Maritime who says, “The ISO standards and the ISO/PAS 280007 certification gives a clear benchmark for all in the shipping industry to be able to select a fully audited and approved service provider with internationally recognised standards to be trusted to safely guard their people and assets.”

Bowline Defence says, “We are extremely grateful for the work that RTI did with us during the accreditation process. They were helpful, thoroughly professional in every respect, and their auditors came with first-hand knowledge of seafaring and maritime risk and knew exactly what they were talking about and taught us a great deal. I would not hesitate to recommend them to anyone else thinking of going down the ISO28007 path.”

Peter Cheney, Director Maritime Services at Control Risks added, “We are delighted that the award of ISO 28000/PAS 28007 is recognition of our long-held commitment to quality, training and safety. It demonstrates to the shipping industry the professionalism of Control Risks and the other leading Private Maritime Security Companies.”

“Whilst Control Risks has an established and reputable profile of 40 years standing in the risk and security industry, we participated in the pilot program to demonstrate our commitment to a respected international maritime industry standard. We chose RTI due to their maritime expertise and their use of experienced master mariner auditors in the accreditation process. We are pleased that the standard now provides a means to enable industry stakeholders to identify with confidence robust, credible, and dependable Private Maritime Security Companies.”

Clare Williamson-Cary, Chief Executive of Securewest International was also pleased to have worked with RTI on the pilot and said, “With over 25 years of service to our maritime clients, Securewest International has long been committed to the development and adoption of security industry standards and codes of practice and we were pleased to support RTI in the pilot scheme and, of course, to receive the certification. This ISO provides for Independent assessment against clearly defined standards which can only help to drive up standards internationally across our industry.”

It is not just maritime security companies affected by the ISO 28007 development, and indeed a number of key organisations have taken a very keen interest in the standards of armed guards and the companies providing them. As such, RTI was pleased to receive supporting comments from the Security Association for the Maritime Industry (SAMI), The Oil Companies International Marine Forum (OCIMF), and the Security in Complex Environments Group (SCEG).

Speaking about the ISO process, David Cotterell, OCIMF Director says, “Standardisation and the production of Industry Standards are a core OCIMF functions.” He added, “Operating to ISO standards is both a mark of quality and often a differentiator for customers seeking contractors to provide a high quality service. We were supportive when IMO decided on the ISO route for the accreditation of private maritime security contractors, and we are very pleased to see ISO 28000 and ISO PAS 28007 certification being awarded.”

Andrew Farquhar, Chairman of The Security in Complex Environments Group (SCEG) says, “SCEG is pleased to see that RTI have also been accredited by UKAS to certificate PMSCs to ISO 28000 and ISO PAS 28007.”

Chairman Farquhar added, “As the maritime security industry moves forward, it is essential that risk and quality management systems are in place that ship operators and industry stakeholders can rely upon. RTI with its experienced master mariner auditors and accreditation as a certification body brings added value to this process.”

RTI Maritime Director Captain Steve Cameron thanked all parties for their assistance and support, saying, “The commitment to excellence which has been demonstrated by the private maritime security companies we have worked with, made a real difference to the process and helped streamline the way in which complex demands were managed. Each deserves praise, respect, and recognition for the efforts they have made.”

Cameron also praised the industry bodies for their role and dedication to finding solutions which have propelled maritime security as a priority, saying, “We should also thank and recognise the pivotal role of organisations such as BIMCO, SAMI, SCEG, and OCIMF as they have tackled difficult problems to ensure that security solutions have been developed and standards have been implemented.”

Port of the month: the Port of Dublin