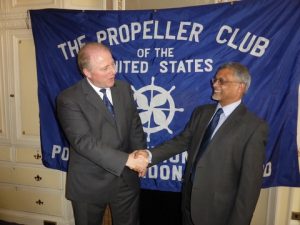 Propeller Club of London welcomes Mr Mukundan from the IMB as its guest speaker,  By Martine Frost, Jeanius Consulting

The Propeller Club members once again enjoyed the hospitality of the Naval Club in Mayfair for their May networking lunch.

Following pre-lunch drinks and networking in the bar, the members and guests were warmly welcomed by Ian Millen, President of the Propeller Club of London. He took particular pleasure in welcoming two new Propeller Club members – Dawn Ingram from the Sailors’ Society and Matthew Cox from Gearbulk UK.

Ian was delighted to introduce the guest speaker Pottengal Mukundan who has been Director of the International Maritime Bureau since 1996 and Director of the Commercial Crime Services (CCS) Division since 1999.  Since joining the IMB in 1981, Mr Mukundan has specialised in the investigation, direction and prevention of onshore and offshore commercial and maritime cases. 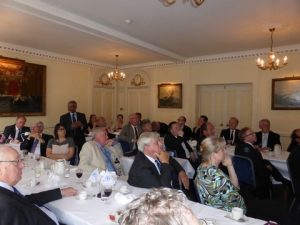 Mr Mukundan explained that the CCS is part of the International Chamber of Commerce (ICC) and is governed by an advisory board, with the company limited by guarantee in the UK. They are financed entirely from their services and are currently experiencing a period of growth in their work. The CCS has two offices, one in London and the other in Kuala Lumpur;  and is comprised of four departments:

The CCS carries out a wide variety of fraud investigations and has seen an increase in the ingenious transactions and modes of operation. Mr Mukundan also noted that, “fraudsters are learning the principles of good marketing and providing good customer support”, as evidenced by the spoof websites they set up, which give credibility to their fraud.

It was fascinating to hear the lengths to which  fraudsters go and reassuring to know that Mr Mukundan and his team are working hard on our behalf to thwart them.

The IMB was set up in in 1981 and ten years later the Piracy Reporting Centre was started. The key reason for this was that, at that time, there was no system in place and no-one wanted to take the problem on. Ships didn’t know where to report attacks, and it didn’t hit the radar of law enforcement agencies. Now, it is the only global 24 hour manned centre – able to receive and disseminate reports of piracy from all ships, all over the world, to ships operating in the piracy hotspots.  It was remarkable to learn that this service is provided free and that information is sent to anyone interested in receiving it, including the IMO.

The guiding principle of the Centre is that they keep nothing to themselves – everything that comes in, goes out.  It must be reassuring to Masters around the world, to know that the IMB is providing the information to help them navigate their way through high risk areas.

The reports cover all types of piracy, ranging from low level armed robbery, through to militants, organised crime and the unique phenomenon of Somali piracy which is now, thankfully, falling.

Even though piracy is declining, it was still noteworthy that, so far, this year there have 80 attacks, 4 hijackings, 68 hostages taken and 1 fatality.  More disturbingly, there are 49 crew members currently being held in various locations ashore in Somalia – 27 for more than two years, 22 for more than three years. Mr Mukundan spoke for us all when he said we should not forget them and, as an industry, we owe it to them to get them back somehow and there are many organisations working together to try and bring this about.

Mr Mukundan said that the value of the IMB lies in the fact that it is an independent organisation, sharing information upon which they and others do analysis. He went on to say that he believes that a single, worldwide point of reporting is the only sustainable, long-term option.

Mr Mukundan also believes that the human cost of piracy is the key reason we should be concerned; financial loss can be covered by commercial mechanisms, such as insurance, but the psychological and physical damage to crew members is far more destructive.  He cited the MPHRP as an organisation doing a great job to help them recover from these traumatic experiences. 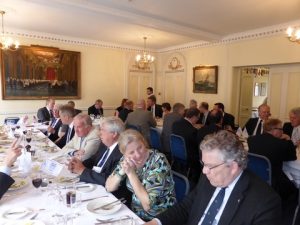 In summing up, Mr Mukundan noted that no-one is immune from a determined fraudster but, perception is key, so an overt approach by business is very important, “information is the key and awareness at the frontline is vital.”

On behalf of the members and their guests, Ian thanked Mr Mukundan for giving such an fascinating and enlightening talk.  Ian said that is was very clear from his talk, that the CCS is more than just about piracy and it was also interesting to learn that free piracy services they provide are entirely funded by the commercial aspects of the organisation.

Picking up on Mr Mukundan’s point about fraudsters becoming good at marketing, Ian concluded by saying that it was important to remember that “just because you are getting a cracking good customer service, doesn’t mean that you’re not getting done!”

The PROPELLER CLUB grew out of an informal group engaged in maritime affairs who met regularly for lunch in New York in 1922.

On 24th January 1923, a formal institution was created as the “PROPELLER CLUB OF NEW YORK” which four years later on 7th November 1927, at the Old Waldorf Astoria Hotel, in New York City spawned the PROPELLER CLUB OF THE UNITED STATES.

The organisation, which designates its branches as “ports”, had national and international aspirations and in 1932 the first “overseas” port was established in Hamburg, Germany.

The purpose of the PROPELLER CLUB is to promote, support and further the Merchant Marine and in general all industries and activities related to the sea and river trades.