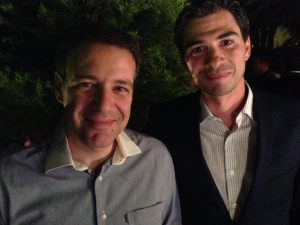 The up and coming shiprepair Athens based brokers and services company BPCO, entertained us in full style, but with exceptional simplicity too at the grounds of their north Athenian premises.  Far from the usual venues their garden party with over 300 guests will remain in the memory of all of BPCO representation companies, over 100, for ever.

Greek specialities well prepared by an array of greek chefs, and excellent wines and greek traditional drinks, such as ouzo and masticha liquor, made their various overseas client-companies executives more than home-feel than business guests.

Aris Papatheodorou and John Boudouris with their teams entertained us to the full and having their families there too created the best atmosphere for such a Posidonia-get-together event. 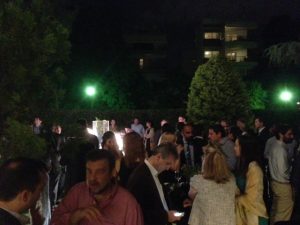 A view at the right side of BPCO’s garden party…

The majority of their greek guests were  marine engineers and consultants from many greek shipowning and shipmanagement companies who entrust their business to BPCO; it was the largest so far do of its kind in this year’s Posidonia, despite the overall down market over the last three years and in particular, as we speak, for 2014, too…

Herebelow follows a quick interview given to John Faraclas by Aris Papatheodorou: