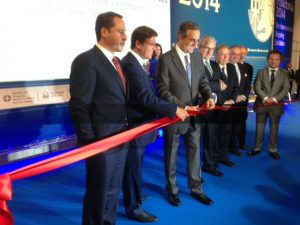 Greek Prime Minister Antonis Samaras inaugurated this evening the international shipping exhibition Posidonia 2014 during an event attended by cabinet members, foreign ministers and state representatives, members of the Greek Shipowners’ Association committee as well as some 1, 200 exhibitors and delegates of the world’s premier shipping event.

In his address, the Greek Premier said: “In the current Posidonia Exhibition, we already broke the 2012 record of participants, as the economic potential of the Greek commercial fleet and the strategic positioning of Greece in future world commerce are gaining power by the day.

The Greek fleet is operating 15% in world commerce. In the last ten years, Greek ship-owners have built more than 2, 500 ocean-going ships, mainly in shipyards of the Far-East. As we speak, a new vessel of Greek ownership is being built every two days worldwide”.

He went on to add: “Only few months ago, the Greek Presidency, through the Athens Declaration, launched the redefinition of maritime policies for the whole of the European Union.

With the support of our Greek shipowners, who are succeeding across the oceans and whom we are proud of, together with the great Greek seamens’ tradition, we are relaunching our country starting from the sea”.

Over the course of this week, more than 19, 000 executives from the Greek and international shipping communities are expected to visit the state-of-the-art Athens Metropolitan Expo venue during the five-day event which occupies 35, 000 square metres of floor space setting a new participation record with more than 1, 870 exhibitors from 93 countries.

Companies from 98 different sectors, from air emissions control suppliers to yachting brokers and from blasting equipment providers to shipchandlers are present this year including an unprecedented 250 shipbuilding and repair specialists occupying 1, 787 square metres of exhibition floor space. Also present are 24 international government organisations and institutions.

Equally impressive is the presence of some 34 bunkers and lubricants companies from Greece, Russia, the Middle East and Asia, reinforcing Posidonia’s growing global appeal and diversity of its offering. The world’s top 20 classification societies are also here including DNV GL, the recently merged German-Norwegian outfit and Lloyd’s Register.

Nearly 80 companies specialising in technologies that promote environmental sustainability and 45 pollution control specialists are also present at this year’s Posidonia in line with growing regulatory pressure to eliminate or reduce to the barest minimum all adverse environmental impacts from ships.

Once again, the biggest national participation belongs to China, followed by Korea and Japan while this year Hong Kong is making a long-awaited comeback after a ten year absence, with Turkey returning after 2006 and Georgia in its maiden appearance. A total of 21 national pavilions are present at the event.

This year’s Posidonia’s Conference & Seminars Programme comprises 34 events during which government officials, industry analysts, bankers and financiers, shipowners and delegates will come together to debate emerging trends and provide insights into the industry’s future. Some of the hottest and most controversial  issues pertaining to the global shipping industry will be tabled during press conferences, workshops, roundtable discussions and seminars on issues ranging from future trends in vessel design, composite material, fuel emissions and bridge technology to injury and illness at sea, maritime risk management, energy savings and from eco-ship technologies to maritime communication.

The President of the Union of Greek Shipowners, Mr. Theodore Veniamis, stated, the following:

“Shipping should be a central part of the vision of European politicians due to its strategic importance for Europe and as the main facilitator of world trade and globalisation. Continuation of the existing Guidelines on State Aids to maritime transport is of paramount importance. The Guidelines will allow EU member states to meet global competition and provide the necessary legal certainty that all businesses require and expect. May I also remind our distinguished audience that the Greek legal framework for shipping, and I refer in particular to the Greek tonnage tax system for shipping as established in 1975, has been the prototype for European shipping policy in this area, leading eventually to the introduction of these Guidelines which have operated successfully in all EU states that adopted them”.

He closed his speech addressing to the Prime Minister:

“I thank you once more on behalf of the Greek shipping community for your presence today. It is proof of your personal and genuine interest in Greek shipping, a national asset, which serves not only our country, but also Europe and the world community”.