Belgium Called Upon to Halt Export of Toxic Ship 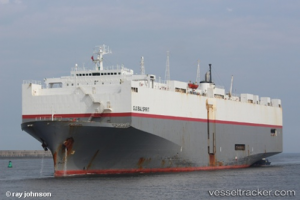 Brussels,  4 June 2014 – The NGO Platform on Shipbreaking, a coalition of environmental, human rights and labour organisations, sent a letter to the Flemish Environment Ministry Monday calling on Belgium to seize the end-of-life car carrier GLOBAL SPIRIT [1]. The ship is now docked in Antwerp and loading 2nd hand cars to be delivered in West Africa before heading for the infamous ship breaking beaches in India where at least six workers have died so far this year crushed by steel plates and many more are sickened by occupational disease due to ship-borne hazardous substances like asbestos or PCBs.

Under the Waste Shipment Regulation of the European Union, Belgium is obliged to prevent the export of all hazardous wastes – including from ships – from its shores to developing countries. The Regulation was designed to prevent the environmental injustice of rich countries exporting their toxic wastes to impoverished countries lacking the technology and infrastructure to manage such wastes. The European Commission has clearly stated that the laws in place are applicable in the case of the GLOBAL SPIRIT and that Belgium has an obligation to ensure that the ship is not exported for breaking to India.

“Belgium must move quickly to prevent this ship from becoming a fugitive from the law. They must hold the ship, ascertain the destination and survey it to assess the amounts of asbestos, PCBs and other hazardous substances it is likely to contain, ” said Ingvild Jenssen, Policy Advisor of the NGO Platform on Shipbreaking.“According to European and Belgian law, only if all hazardous materials are removed from the ship can it be allowed to be exported to South Asia.”

The end-of-life vehicle carrier GLOBAL SPIRIT has been used to transport cars for Nissan-Renault on a regular route Morocco-EU-Turkey and is currently under long term time charter with Hoegh Autoliners under the management of Autotrans based in France. The GLOBAL SPIRIT is sold to an Indian breaker for scrap at a price of 6, 8 million dollars (512 USD per ton) [2]. Only by using cheap labour and avoiding costly environmental protections can a profit from the steel be made at this high a price. The ship is expected to contain asbestos in its construction as well as explosive and flammable fuel residues which lies as a hidden danger for thousands of unprotected workers in Alang.

The Platform has sent a letter to the Japanese owners of the ship, Mitsui O.S.K. Lines Limited (MOL) and Nissan Car Carriers (NCC), calling for a sustainable solution for the dismantling of the GLOBAL SPIRIT and the adoption of a company policy on ship recycling that will ensure dismantling of their fleet under safe and green conditions [3]. The charterers of the ship, Hoegh Autoliners, which also are 20 percent shareholders in NCC, have already adopted a sustainable ship recycling policy for their ships ‘off the beach’.

“So far this year six workers have been reported killed by falling steel plates at the Alang shipbreaking yard. Contrary to the claims of the Alang breakers and cash buyers such as GMS, the brutal death of these workers stand as a stark testament to the unsuitability of using ocean beaches for the safe and sound recycling of ships, ”said Ritwick Dutta, environmental lawyer at NGO Shipbreaking Platform member organisation LIFE. “Such practices would never be allowed in Belgium and it should not be allowed in any country in the world.”

Currently over 70 percent of the global commercial fleet of end-of-life ships are run ashore and broken by hand on the beaches of India, Bangladesh and Pakistan, where labour is cheap, labour rights poorly respected and pollution laws weak, lacking or not-enforced. Yet in Europe, government owned ships are being broken only in sophisticated yards located in developed countries while commercial vessels are still too often exported even when such exports violate the law [4].

“It will be a glaring double standard and a sad irony if the French and Belgian governments are forced to use a Belgium yard to recycle their old ships and meanwhile Belgium fails to act to stop another toxic ship from being exported from their shores, ” said Ingvild Jenssen. “Both government and commercially owned ships are illegal to export to developing countries, and they should all be managed in green ship recycling yards in developed countries and not on the dangerous and polluting beaches of South Asia, ” she said.

[2] In close proximity of the vessels operational route, Turkish ship recyclers were reported to have bid for the ship early April, offering a price of 380 USD per ton.

About the GLOBAL SPIRIT: