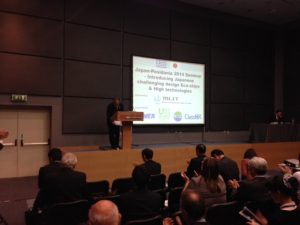 Greek shipowners’ spending in new buildings and retrofits of existing fleet has attracted the global maritime community to Athens once again with the leading ship building nations lining up to showcase their goods at the Posidonia exhibition, the world’s most prestigious shipping event.

“Introducing Japanese challenging design Eco-ships & High technologies, the Japan-Posidonia 2014 Seminar” took place yesterday the 4th of June between 10:30 and 14:30 at a full house at the seminar room of the Metropolitan Expo Centre. A great event, one of the best of its kind, had as its moderator the Minister of Land, Infrastructure, Transport and Tourism of Japan. The latest Japanese advanced eco-ship designs and energy saving products were presented yesterday to delegates of the conferences and seminars programme of Posidonia as the land of the rising sun is trying to regain its prominence following a dip to the world’s third place in terms of newbuilding order volumes behind China and South Korea. 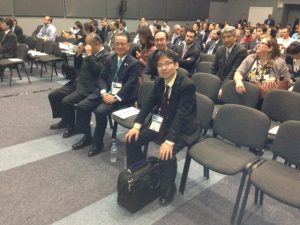 Then, Theodore Vokos, Executive Director of Posidonia Exhibitions, the organizers of the biggest trade show that is held in Athens every two years, being the guest speaker, said: “In 2013, Japan received only 14.8% in newbuilding orders from the global order book, falling into third place behind South Korea and China who commanded 33.1% and 40.8% respectively. Putting this against a global perspective, the whole of Europe received just 4.1% in global shipbuilding orders last year”.

The Keynote Speech on Japanese advanced eco-ships and energy-saving products, “Golden opportunity to buy Japanese Products!” was given by Mr. Shinichiro Otsubo, Director of the  Shipbuilding and Ship Machinery Division.

The yen – dollar exchange was named as one of the culprits for Japan’s lost mojo by Mr. Otsubo,  who stated: “The yen has been weakening against the dollar since the end of 2013 but now is a good opportunity to buy Japanese high quality eco-ships and energy saving products”.

He went on to promote Japan’s attractive finance packages (JBIC) that provide the lowest interest rate to shipowners from around the world sending also a message to Greek fleet owners: “Since 2011, our attractive financing packages are also available for marine vessels registered in developed countries, including Greece under the scheme of export loans provided by JBIC”, he said.

Otsubo added that the utilization of Japanese eco ships and energy saving products can bring significant benefits to ship owners against a backdrop of tightening environmental regulations and rising fuel prices. 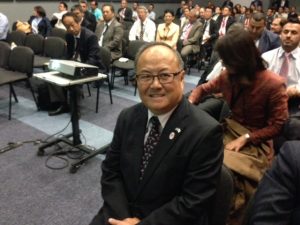 A happy and content Japanese Ambassador Mr. Masuo Nishibayashi at the end of the presentations

A nice reception followed, good for networking too giving time for attendees to ask more questions and network; excellent!

Belgium Called Upon to Halt Export of Toxic Ship