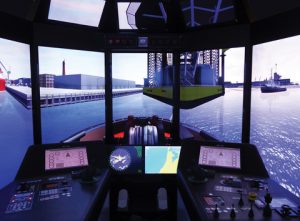 IJMUIDEN, June 2014 – During a festive ceremony on June 3rd, the new 360-Control Tug & OSV Training Centre was officially opened for the general public and customers. The simulators for the training centre are delivered and installed by VSTEP.

The high-tech training centre is a project of 360-Control, a joint venture between Iskes Towage & Salvage and Damen Shipyards and is located at the port entrance of the Amsterdam North sea canal.

The VSTEP simulators delivered include a 360-degree NAUTIS Full Mission Tug Simulator and a 240-degree NAUTIS Desktop Trainer to allow realistic training of tug & OSV handling and manoeuvring. To allow training of complete exercise scenarios using a vessel and two tugs (one at the stern and one at the bow) these Tug and OSV simulators will be expanded with another 360-degree NAUTIS Full Mission Tug Simulator at a later stage. A NAUTIS Instructor Station was installed to provide total instructor control during exercises.

The 360-Control training centre is set to become a centre of excellence for tug and offshore training in the region by combining the expertise of industry leaders Damen and Iskes with advanced next gen simulators.

About 360-Control
360-Control is a new simulator training center in the tug and offshore sector, located in IJmuiden, the entrance to the port of Amsterdam. Recently the first simulator with 360° field of view is operational. This simulator is one of the most advanced and realistic ASD tug simulators in the world. 360-Control offers standard ASD trainings and assessments as well as tailor made solutions. The proven training methods combined with the unique facilities results in very efficient and effective training courses and assessments. www.360-control.nl

About Iskes
Iskes Towage & Salvage is a privately owned towage company with a long history in professional towage. During the years Iskes has always taken a special pride in its tugboats and people. Iskes values its customers and stand for professional Tug service since 1928. www.iskestugs.nl

About Damen
Damen is a ship builder, well known for building tugs and OSV’s, with more than 6, 000 employees working at 35 companies worldwide. Since the introduction of modular shipbuilding (The Damen Standard), Damen has built over 5, 000 vessels and annually up to 150 vessels are built. Damen Shipyards operates in many shipbuilding sectors and has become a prominent and recognised shipbuilder throughout the world. www.damen.com

Unions put Qatar in the dock at UN body