UGS President speaks out as Posidonia 2014 draws to a close 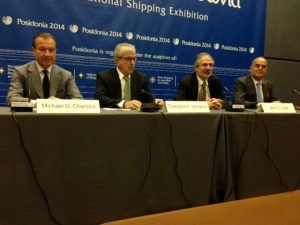 Statements of the UGS President, Mr. T. Veniamis,  earlier today during the UGS Press Conference on the occasion of “Posidonia Exhibition 2014″

The President of the Union of Greek Shipowners (UGS), Mr. Theodore Veniamis, during the press conference to Greek and foreign journalists on the occasion of Posidonia Exhibition 2014 noted, inter alia, the following:

• Posidonia 2014 brought once again to the fore, the performance of the international shipping industry, this entrepreneurial sector which offers irreplaceable and high level seaborne transportation services to global trade.

• In Posidonia 2014 it is asserted that the Greek shipping maintains its leading position in the global ranking of shipping nations, despite the adverse conditions in the international shipping market. 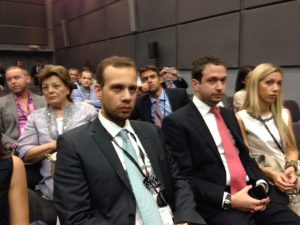 These numbers prove the key role of Greek-owned fleet in maritime developments and its strategic importance for Greece as well as for our trading partners.

• The attention was drawn to the importance of Greek-owned shipping for Greece.
In 2013, two studies concerning the importance of shipping for the Greek economy were published: the study of the Foundation of Economic and Industrial Research (IOBE) entitled “The contribution of Oceangoing Shipping to the Greek economy” and the study of The Boston Consulting Group (BCG) entitled “Impact Assessment of Greek Shipping on the Economy and Society”.

Both studies, each one following its own methodology, concur to the same assessments and conclusions. They characterise Greek shipping as one of the basic pillars of the national economy, emphasizing the important contribution of the maritime sector to the GDP which in the last two years exceeded 7% of the overall GDP as well as the creation of over 192.000 jobs. Moreover, the two studies highlight the potential of the sector in becoming the key driver of the Greek economy through further establishment of maritime activities in Greece and increase of employment in the various subsectors of the shipping industry. The two studies allege that the existence of a stable and competitive institutional framework is a basic prerequisite. 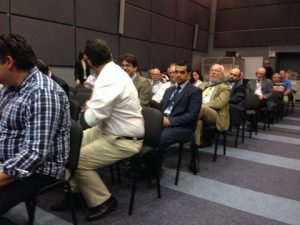 The left side of the auditorium

• Further to the above, the IOBE has produced a new study, not yet publicized, referring to the boosting of employment of Greeks in oceangoing shipping. The study assesses the expected advantages from job creation of Greek seafarers in case Greek nationals are employed as officers and ratings on the Greek-owned fleet in substitution of foreigners. In such a case, new jobs will be created directly on board ships and indirectly taking into account the multiplier effect on the economy, and there will be an increase of the annual domestic product to the tune of € 2, 8 bn up to the optimum theoretical scenario of € 5 bn.

The above are feasible on condition that economic terms will prevail in the Greek labour market in accordance with the terms of the international maritime labour market and the relevant International Conventions. It should be borne in mind that the Greek-owned vessel has to be competitive in order to survive in the international shipping arena. Moreover, the immediate operation of the private maritime education becomes a necessity in view of the limited capacity for cadets of the existing Marine Academies. 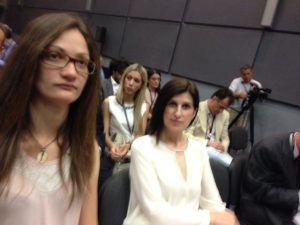 Attention and interest from all listening to Theodore El. Veniamis’ presentation

Unemployment is the basic problem which the Greek society faces nowadays and, therefore, coping with it is decisive for the recovery of the Greek economy following the last six years of economic recession. This study confirms that shipping could contribute in facing unemployment by offering professional options of work to unemployed youngsters in this dynamic sector.

• Posidonia 2014 coincided with the Greek Presidency of the Council of the European Union, which is at a crossroads with significant changes in the governance of its legislative institutions. Some days ago the members of the new European Parliament were elected and soon the new Commissioners will be appointed.

European shipping should be placed at the center of the vision of European policy. The maintenance of a competitive fleet controlled by the European Union is of the utmost importance for servicing its economic, commercial, energy and strategic interests. However, the continuation of the existing Guidelines on state aids to maritime transport is a necessary prerequisite for the competitiveness of Community shipping. These Guidelines, for many years, provide the institutional framework for the operation of Community shipping safeguarding a level playing field for it.

• Finally, there was briefing on the UGS Social Welfare and Solidarity Programme which since 2012, in a discreet way, supports deprived groups hit by the dire economic conditions. The social welfare initiatives of the UGS are of a pan-hellenic character and through a systematically organized mechanism benefit directly more than 50, 000 individuals in 110 regions of continental and insular Greece.

In particular, the catering programme with monthly packages of food supplies benefits 11, 000 families and is implemented in co-operation with 30 bishoprics, 25 municipalities and 60 stakeholders organizations in and out of the Attica region.

As regards medical assistance for vulnerable social groups, the medical care programme “Health for all” financed by the UGS and implemented by Doctors of the World has already visited more than 30 regions and has offered medical services to 9, 000 deprived citizens all over Greece, and it continues at a rapid pace. The UGS also supports with specific actions 40 care centres and social organizations protecting infants, children, disabled and elderly people. 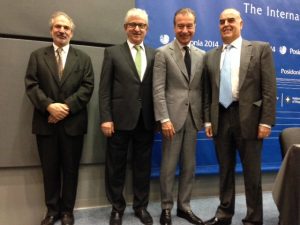 Moreover, repair work and upgrading of equipment and infrastructure of the Marine Academies hosting the future generations of Greek seafarers are in progress.

An interesting Q&A followed with a total of six questions from respective journalists and a lawyer including all aspects of the industry’s problems, developments et al. It was one of the best ever presentations and performances delivered by a president of the UGS and we hope the organisers will sent us the full transcripts of the event.