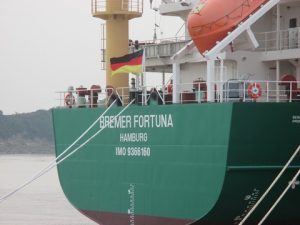 The announcement was made at a ceremony to mark the successful transfer of the vessel M.V. BREMER FORTUNA to the ClassNK Register held at Hamburg’s Hafen-Klub on 10 June 2014. The transfer of the vessel, a 6, 668 GT multi-purpose cargo ship (MPP) owned by Kollmar-based Rörd Braren Breederungs GmbH & Co. KG, marks the first time that ClassNK will provide classification services for a German-flagged vessel, a major achievement for the classification society which has been rapidly expanding its services in Germany.

During the ceremony, Capt. Rörd Braren, Managing Partner of Rörd Braren Breederungs GmbH & Co KG was joined by ClassNK Chairman & President Noboru Ueda in celebrating the new partnership. Speaking on the occasion, Mr. Ueda said that: “ClassNK is deeply honored to be chosen to provide classification services for the M.V. Bremer Fortuna”, and gave assurances that ClassNK would put full resources into the safe, secure, and effective operations of the vessel. The registration of the vessel marks an important step forward for ClassNK and its growth in Germany, which has seen more than 170 German-owned newbuildings and existing vessels apply for registration with the classification society since it opened its Survey Operations Headquarters in Hamburg at the end of 2011. 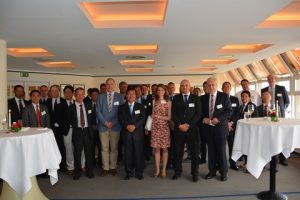 A group photograph taken at a reception held after the ceremony

In addition to the registration of its first German flagged vessel, ClassNK also announced that it had earned expanded authorization from the German government to carry out surveys and audits for German flagged vessels. ClassNK initially earned authorization to classify German flagged vessels and issue statutory certificates on behalf of the German government in February 2013. This authorization has now been further expanded to included audits and certification for the ISPS Code, a key part of the SOLAS convention related to ship security.
Representatives from the Government of Germany, Mr. Jörg Kaufmann, Head of  Department Maritime Shipping and Dr. Liliane Rossbach, Head of Section Prevention of Threats to Maritime Security also joined the ceremony to present ClassNK with official recognition of the authorization. Mr. Ueda thanked Mr.
Kaufmann and Dr. Rossbach and said: “I would like to assure you that ClassNK will keep on providing the best quality services and continue contributing to the German maritime industry.”