ABB: Tests confirm up to 27 percent fuel savings on ships from Onboard DC Grid 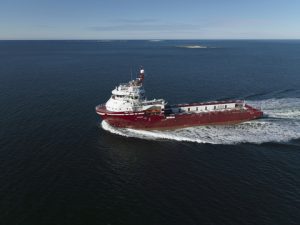 The measurements and tests, conducted by Pon Power in collaboration with ABB on Myklebusthaug
Offshore’s platform supply vessel “Dina Star, ” identified reduction of specific fuel oil consumption of
up to 27 percent. These are the first documented results from a vessel outfitted with ABB’s Onboard
DC Grid, which allows engines to run at variable speeds for top fuel efficiency at each load level.

Illustration of Onboard DC Grid system

“Our Onboard DC Grid is a significant step forward for electric propulsion. We are pleased that the
concept delivered results that exceed our expectations”, said Veli-Matti Reinikkala, head of ABB’s
Process Automation division. “Onboard DC Grid is a competitive advantage to ship owners operating
a wide range of ship types from offshore vessels to ferries and yachts seeking to increase fuel
efficiency and reduce emissions.”

“Noise and vibration reduction has already been a focus of ours for years with our GenFlex Design
solution. The ability now to document this level of fuel efficiency alongside the noise reduction is a
very important new step for us as a power solution provider, especially for our customers operating in
challenging conditions”, says Ole Knarberg, Commercial Director for the Marine segment in Pon
Power Scandinavia. Dina Star is powered by four Caterpillar 3516 engines in combination with a C32
in a variable speed application.

“We operate in a highly competitive market where customers are increasing their focus on operational
costs and environmental impact. The results from Dina Star, the first vessel to feature ABB’s
advanced Onboard DC Grid technology, are promising and enhance our competitive edge”, says
Tore Myklebusthaug, General Manager at Myklebusthaug Management. “Based on the test results,
we can now confidently say that the Onboard DC Grid delivers considerable fuel savings, to the
benefit of the vessel charterers.”

About ABB’s Onboard DC Grid concept
ABB’s Onboard DC Grid represents a breakthrough for the maritime industry in optimized propulsion
by distributing power through a single DC circuit providing significant power savings while also
improving the safety and redundancy compared with traditional AC systems.

By distributing electricity in DC, the Onboard DC Grid system allows engines to be operated at
different speeds. As a result, the fuel consumption and emissions are reduced significantly in
comparison with traditional propulsion systems. The system also allows for improved dynamic
response of the engines.
The Onboard DC Grid also facilitates use of batteries and other energy storage devices which further
improve the energy efficiency and reduction of emissions.

To learn more about the Onboard DC Grid, view the introduction video on Youtube.

ABB (www.abb.com) is a leader in power and automation technologies that enable utility and industry
customers to improve performance while lowering environmental impact. The ABB Group of
companies operates in around 100 countries and employs about 150, 000 people.