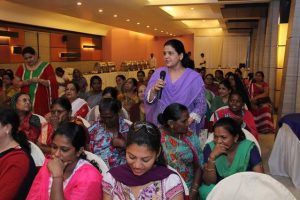 The strength of women workers was celebrated in Kandla, India recently as a 90-strong women’s meeting was held by the port union there.

ITF dockers’ section secretary Sharon James and ITF Asia/Pacific assistant regional secretary Sangam Tripathy attended the meeting of Transport and Dockworkers’ Union (TDWU) of Kandla members. James credited the TDWU with a very progressive approach to women workers, pointing to the fact that the ITF-affiliated union organises across a range of categories despite operating in a very male-dominated environment.

James met with activists and heard about the challenges they face, particularly regarding proposed development plans in the area. Opportunities for the union to organise and grow were also high on the agenda for discussion.

Women from across port departments, including sweepers from the outdoors section, engineers, and medical, marine and finance staff, shared their experiences and opinions on the union and its role in their working lives. Some of the women who had been on daily wages shared their story of how they made it onto the regular payroll with the support of the union. However, there were still workers in this situation and the union pledged to support them.

Seema Mohan, secretary of the TDWU-Kandla and ITF Asia/Pacific dockers’ section women’s representative, said: “We have been talking about being union members and what it means to us, practically day to day. The union has clearly played a very vital role in the welfare of its members on various issues but our work is not done. We will continue to work for equality and decent conditions for all our members.”