Only three weeks before the HPS races get under way… 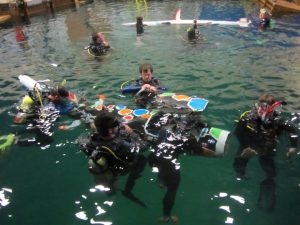 Twelve teams of university students from six countries and from three continents will gather in three weeks’ time in a unique sporting and engineering challenge, when they race their human-powered submarines in the 2nd European International Submarine Races (eISR) in QinetiQ’s Ocean Basin at Gosport, UK – the biggest covered water space in Europe.

The eISR, being held Monday 7- Friday11 July, will see the teams’ engineering skills put to the test, for every human powered submarine taking part is designed and built by the university concerned with vital amendments and adjustments and even re-building taking place during the week. It also tests the students’ sporting prowess and stamina, for the teams race against the clock with the pilot wearing SCUBA gear and pedalling underwater around a demanding slalom course in the 122m x 61m and 5.5m deep TANK (the approximate size in terms of width and length of an international soccer pitch).
.
Teams competing for the 2014 awards are: École Polytechnique de Montréal, École de Technologie Supérieure and University of British Columbia all from Canada; Rhine Waal University of Applied Sciences from Germany; University of Delft from the Netherlands; University of Auckland from New Zealand; University of Michigan and University of Washington from the USA; and four teams from the UK with University of Bath, University of Plymouth, University of Southampton, and University of Warwick.

Many of the overseas team members have never been to the UK before and are looking forward to the challenge that lies ahead, as well as the opportunity to see something of southern England.

More than just the races
“There were just six teams at our inaugural races in 2012, so it is highly rewarding to see a dozen (our top limit) registered, ” says Race Director, Prof William Megill, FIMarEST.

“There’s more to the eISR than the twelve teams competing throughout a gruelling, and rewarding, week which will see many having to work long hours on their submarine to ensure better times, or even completion of the course. On Wednesday 9 July, the eISR plays host to a Graduate Fair and series of Master Classes, which are open to all, with a stimulating range of speakers including Huw James, the adventurer, astronomer and outdoors enthusiast, who will wrap up the day; and the evening before will see a lecture on autonomous underwater vehicles take place to coincide with one of our networking events.”

Broad range of sponsors
James Fisher Defence (JFD), the world’s leading provider of submarine rescue services that offers a range of manned-submersibles for naval and military applications is the latest organisation to join the roll call of sponsors, others being the Lloyd’s Register Foundation, the Babcock Group, BMT Defence Services, QinetiQ and the Institute of Marine Engineering, Science and Technology (IMarEST).

Looking forward to the eISR Ben Sharples, Director, James Fisher Defence said: “JFD is proud to once again be supporting the European International Submarine Races. With its focus on design, innovation, and safety, the event provides the perfect opportunity for us to engage with students who possess the skills and experience essential to our business, .” adding: “Of course, it’s also great fun!”

Graduate Fair, Master Classes, and Lecture plans
As Prof Megill explains: “The Master Classes, with ‘inspire’ as the core message, will include speakers from Babcock Marine, BMT, James Fisher Defence, as well as a group of young people from the naval engineering community.

“We are delighted that Huw James will be with us to close the Open Day. He is an active campaigner for public participation in science and the outdoors. He has brought his brand of energy and enthusiasm to hundreds of stage and screen appearances and can be seen performing at many of the science festivals and events across the UK.

“Originally trained in space science and a fellow of the Royal Astronomical Society, Huw is an active rock climber, surfer, sportsman and all-round adventurer. He combines these interests together to create his unique approach to enthusing all ages about the science of the universe and the natural world. We hope very much that he will enthuse our student competitors and encourage them to spread their enthusiasm for STEM to schools in all their countries.

“In addition, the IMarEST is running a Stanley Grey Lecture providing an overview on the use of AUVs for monitoring and observation in the Submarine Museum on the evening of Tuesday 8 July to be given by Dr Gwyn Griffiths, Principal and founder of Autonomous Analytics. His experience with autonomous marine vehicles stretches back to 1989 when he began his involvement with the Autosub programme.”

Admission to the Open Day is free of charge to all, but registration at www.subrace.eu/community/register  is imperative as QinetiQ’s is a secure site. To register for the IMarEST Stanley Gray Lecture, which is also free to attend, please email events@imarest.org.

Influential panel of judges
The five-strong expert eISR judging panel is led by Vice Admiral Sir Robert Hill, and will be judging throughout the five days of the races with the Grand Prize and All-Round Runner-Up determined by a formula combining design, manufacture, race performance and reliability; and other prizes including ‘Week’s Top Speed’, ‘Agility Award’, ‘Award for Innovation’;  and ‘Best Presentation’.

“The quality of our judging panel shows just what a serious engineering event this is, ” says Prof Megill. “We are indebted to them for the time they spend both before the event, poring over designs; and at the eISR itself.”

Vice Admiral Sir Robert Hill KBE FREng Hon FIMarEST
Sir Robert Hill had a 37 year career as a submarine engineer officer in the Royal Navy.  After being the Engineer Officer of the diesel powered submarine THERMOPYLAE, he qualified in nuclear power and served in the Polaris submarine REPULSE.  Subsequent appointments were mainly in the engineering departments of the Ministry of Defence, involved with future designs of submarines and surface warships.  Until retiring in 1993, as a Vice Admiral he held the posts of Chief Naval Engineer Officer and Director General Submarines.

After leaving the Royal Navy he has been variously, President of the Institute of Marine Engineering (now IMarEST) and a non-executive director of VT(Group)Ltd, SEA(Group) Ltd and British Energy plc where he chaired the Safety, Health and Environment Committee. He has been a member of the Lloyd’s Register General Committee and is Chairman of the Bath Theatre Trust.

Gareth Somerset MBE, BSc
Gareth Somerset graduated from Liverpool University with a degree in Oceanography.   His early specialisation in sonar design has persisted through much of his career, which broadened into a much wider involvement in engineering management.  In 1988, Gareth, with four colleagues, founded Systems Engineering & Assessment Ltd (SEA).  SEA grew over the following 20 years from a five man start-up to a company of 250 staff.

Gareth has had a longstanding interest and involvement in the Royal Navy’s submarine programmes, from the CHURCHILL class through to the most recent ASTUTE class.  This has included the procurement of world-leading ASW sonar systems, the development of novel submarine sensor systems, and the evolution of command and communication systems.  He has had close technical involvement in the design and development of unmanned underwater vehicles.  Gareth has an association with the National Oceanographic Centre, Southampton, with particular interests in NOC’s autonomous underwater vehicle programmes and novel oceanographic sensor development.

Gan Jenkins RCNC CEng FIMarEST
Gan Jenkins joined the Ministry of Defence as an Engineering apprentice. After graduating with a degree in mechanical Engineering he joined Chatham Dockyard as a shift manager refuelling nuclear submarines. He obtained a second degree in nuclear technology in 1969 after which he had various posts responsible for the design and development of nuclear submarine equipment.  As a manager in Devonport and Rosyth dockyards he was involved with the repair and refit of submarines and surface ships.  He then became head of the MoD section responsible for the procurement and support of nuclear submarine reactor plant. He was appointed as the Director of Future Projects for the Navy in London in 1987 after which he served for three years as head of one the MOD’s central civilian management divisions.  In 1997 he became the Director of Marine Engineering in the Ship Support agency .Since retiring from the MoD in 2001,   he has provided consultancy services to various organisations both within Government and the private sector.

Liz Whitrow CEng MRINA
Liz Whitrow is a Programme Manager for the Canadian Victoria Class submarines.  A Naval Architect with BMT since 1996, she gained a breadth of experience on both surface ship and submarines, transferring lessons from in-service submarine support into shaping new design programmes in the UK, as Manager of the Submarine Team and part of combined industry team assessing the UK future submarine requirements.  Liz brings her knowledge and experience of the complex technical challenges facing submarine design to her role in managing complex programmes.  In 2013 Liz moved from BMT Defence Services in Bath, UK to BMT Fleet Technology in Ottawa, Canada where her combined skills of programme management and experienced submarine designer are underpinning her role as Programme Manager for upgrading the External Communications System on the Victoria Class Submarine, as BMT supports Babcock Canada deliver the Victoria Class In-Service Support Contract.

Commodore Peter Hurford OBE, FREng, FIMechE
Peter Hurford trained as a submarine marine engineer officer in the Royal Navy. After 10 years sea service in 4 submarines he moved into supporting appointments including superintendent of the Naval Reactor Test Establishment and senior marine engineer of the submarine flotilla. He completed his RN service as the Navy’s chief nuclear regulator in the rank of Commodore. Peter then worked for 6 years for Transport for London, responsible for the engineering and safety of the public piers on the Thames. Peter is now retired and does a bit of consultancy including membership of the Defence Nuclear Safety Committee.