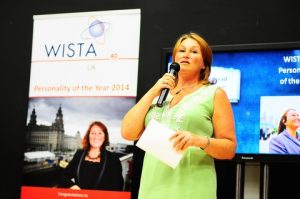 London 20 Jun. 14 WISTA-UK has announced its choice for its Personality of the Year 2014: Angie Redhead, cruise and operations manager at Liverpool Cruise Terminal.

The judges’ decision was announced, appropriately, at WISTA-UK’s Liverpool Forum, which was organised to coincide with Liverpool International Festival of Business.

Ms Redhead will now be the nomination for International Personality of the Year, at the Women’s International Shipping & Trading Association global conference in Limassol, Cyprus, from October 8-10 2014.

It is the first time that WISTA-UK has selected as its Personality of the Year an executive with direct connections with Merseyside, where substantial port expansion is under way.

Ms Redhead told the meeting at Port Academy Liverpool, which is part of Hugh Baird college of further education in the northwest city, “This is a total surprise. Genuinely I did not know, and this is an absolute honour… for the city, for the UK. There is so much great stuff going on in the maritime sector.”

Under her guidance, Liverpool Cruise Terminal has since being opened in 2007 restored the city’s prestigious position on the international cruise map.

After working overseas, Ms Redhead returned to Liverpool in 2006 to take up a marketing role to promote Liverpool as a cruise destination to the rest of the world, from which she sensed “such a sense of ownership about the terminal, which belongs to the city and people of Liverpool.” Without the enthusiasm of the maritime community, the current success of the terminal would not have been achieved. “From the day I started, I felt that I had joined that maritime community, ” said Ms Redhead.

Of the cruise sector, she said: “We are the shiny shop window. We are the ships people like to look at. There is no greater example than the visit here at the end of May of Cunard’s Queen Victoria when 20, 000 people came to wave goodbye.” This had been the first overnight call made by a Cunard ship in Liverpool for almost half a century, and celebrated the centenary of the maiden voyage of the Aquitania, a four-funnel liner known as the ‘ship beautiful.’

Ms Redhead said: “I would love to inspire young women to come into the sector, because no two days working there are the same, and we are never, ever bored.”

Maria Dixon, president of WISTA-UK, said: “Angie has displayed the attributes one looks for when making the Personality award, including excellent knowledge of the shipping industry, projecting a sense of belonging to the industry, being open-minded, dynamic, contributing to improving the image of the industry, and showing significant achievement through hard work, passion and commitment.

“She is a great communicator and will make an excellent ambassador both for WISTA-UK and for the principles of WISTA internationally.”

Ms Redhead spoke of her delight at the rise in the number of cruise calls at Liverpool – there will be a record 46 this year, including four summer visits by the Crown Princess. In 2015 two special events will celebrate the 175th anniversary of Cunard at the company’s ‘spiritual home, ’ the Liverpool waterfront. There will be a first ‘three Queens’ meeting on the Mersey on May 25 2015 when Cunard flagship Queen Mary 2 will be joined by fleet companions Queen Elizabeth and Queen Victoria; and the Queen Mary 2 will sail from Liverpool on July 4 2015 recreating the original voyage of Britannia from Liverpool to Halifax and Boston in 1840.

The terminal will enjoy its most ambitious year in 2014, with 40 ships due including some making their inaugural call to the city, bringing more than 60, 000 passengers from around the world . During the cruise terminal’s first full season of operation in 2008 there were just 13 calls.

Ms Redhead says that the growth of cruise calls to Liverpool reflected the city location of the terminal and the proximity to cultural and other quality experiences, “on the doorstep and in the region.” She is pleased that the destination is becoming increasingly popular with the US market.

In 2013, Cruise Critic – sister site of Trip Advisor – named the city as their top pick based on the warm welcome for visitors, the historic architecture nearby, the fact that many attractions are within half an hour’s walk from the terminal, and the benefits of the terminal itself.

Among other commitments, Ms Redhead is a member of Northwest Port Welfare Committee.

Women’s International Shipping & Trading Association (WISTA) is an international organisation for women in management positions involved in the maritime transportation business and related trades worldwide. It is a major player in attracting more women to the industry and in supporting women in management positions. With networking, education and mentoring in focus, WISTA seeks to enhance members’ competence and empower career success.

WISTA is growing and currently counts over 1.600 individual members in 34 National WISTA Associations. WISTA-UK was founded in 1974 and is the oldest of the WISTA National associations.

Passengers ‘worried about flying on LAN and TAM’

The best l(a)unch until now from OMFIF