Splendour of the rainforests…

Leading Sri Lankan artist Senaka Senanayake seems to paint his beautiful depictions of rainforests almost as fast as the humid habitats of wildlife, birds and insects are disappearing across the tropical belts of the world.

Since March 2014 he has completed a significant series of canvases on the theme, although there is not the least sign of haste in the oeuvre, just the opposite: the immense care and love with which he delineates animals, birds and foliage captivates the viewer.

Nor is his approach to the depredation of the forests gloomy or forbidding. He conveys utter joy in the glories of nature, as was evident when his exhibition at Grosvenor Gallery, London, opened on June 19, for a short season until July 11.

Senaka takes only two to three weeks to produce each marvel of meaningful magnificence, and he is already moving on to his next theme – championing the cause of the threatened coral reefs of the oceans.

He told us during the private view evening that amid concerns for the future of rainforests, his mission was “to show beauty every way you can, attract people’s attention rather than conveying depression.”

He said that Sri Lanka has lost about 70% of its rainforest. Tea estates cover what was once forest, although the British left some elements in place.”Unfortunately after independence, along came various people who seemed to forget that. More recent governments have become conscious of the problem.” 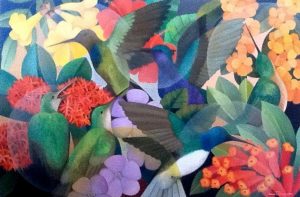 He went on: “I do travel a lot within the country, and that inspires me. In 2005, I visited a rainforest, which became my muse for many of my shows.” He is determined to be “very positive” in his efforts to encourage conservation, rather than dwell on the negative aspects of destruction.

Back in his studio, he is setting up his next series to focus on endangered corals, a disheartening feature in his home country as well as in regions including Australasia and the Caribbean. In Sri Lanka, most of the reefs are less than 40 km from the shore and have suffered from coral mining, destructive fishing and sedimentation. A report some years ago for the UN Food and Agricultural Organization by Arjan Rajasuriya of Sri Lanka’s National Aquatic Resources, Research and Development Agency, said that many near-shore reefs, particularly along the southwestern and western coastal areas, were being silted up rapidly.

Sri Lankan reefs support many species of invertebrates including commercially important spiny lobsters, shrimps and crabs and marine flora such as sea grasses and algae, but there has been over-exploitation of these resources. Dolphins, whale sharks and sea turtles have been sighted among inshore and offshore reefs. It has been suggested that at least 30-40% of coral reef should be restored to support sustainability.

Grosvenor Gallery, in the St James’s area of the West End, has a long history of promoting modern and contemporary Indian artists, and this is its first major venture into the pool of Sri Lankan talent.
Senaka Senanayake was a child prodigy, who at the age of 10 had his first international one-man (that should read one-boy!) show, in New York. After studying art and architecture at Yale University, he dedicated himself to painting, and returned to his home country where he became ever more closely involved with environmental concerns, with forays overseas for more than 100 solo shows. His last show in London was in 1980, at the Upper Grosvenor Gallery. 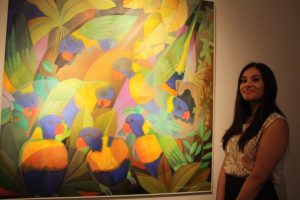 Strong colour infuses every centimetre of his canvases, his unflinchingly upbeat approach yielding utter delight for the viewer. Those who have visited his home in Colombo appreciate this perspective, for he lives on the doorstep of a lush tropical garden, full of exotic plants which attract colourful birds and iridescent insects.

The best l(a)unch until now from OMFIF