Speakers and delegates from 18 countries gathered in Amsterdam late last month (May) for the 12th International Naval Engineering Conference (INEC 2014) held at the Marine Establishment Amsterdam, and described by one delegate as “probably the highest academic level marine conference in the world”.

With its theme ‘Innovative solutions to global trends’, INEC 2014 attracted nearly 300 attendees from navies and naval procurement at all levels from Sub-Lieutenant to Vice Admiral, and commercial attendees from a range of companies from prime contractors to SMEs. 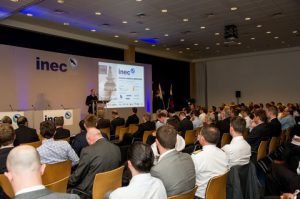 INEC 2014 was organised by the Institute of Marine Engineering, Science and Technology (IMarEST) in association with the Royal Netherlands Navy (RNLN).

“The Royal Netherlands Navy was the driving force behind INEC 2014 and supported the conference with active participation from both the RNLN and Defence Materiel Organisation. Vice Admiral Matthieu J M Borsboom, Commander of the Royal Netherlands Navy was one of our keynote speakers together with the wholehearted support, and presence, of both Rear Admiral (Ret) Ruurd Lutje Schipholt KNL OON HonFIMarEST and Rear Admiral Dr Arie Jan de Waard who are Patrons of INEC, ” explains IMarEST Chief Executive, David Loosley.

“We were also extremely grateful to Tony Graham RCNC, Director Ships at the UK Ministry of Defence who stepped in to give the other keynote address on behalf of Vice Admiral Simon Lister CB OBE.

“I would like to thank conference chairman Cdre John Newell, his committee and all involved with the organisation of this key event in the naval engineering calendar; and agree wholeheartedly with the opinion of one of our delegates who said ‘INEC 2014 was an outstanding event and the highlights had to be the involvement of the RNLN and the visit to HNLMS Tromp’. The Conference Reception was hosted by the Royal Netherlands Navy aboard HNLMS Tromp at the end of the second day of the conference, providing all participants with a unique opportunity to visit this innovative class of ship and to learn more about the role of the Royal Netherlands Navy worldwide.

“The committee refereed the largest proceedings produced for INEC at 870 pages – no mean feat and something on which they are to be congratulated. On behalf of IMarEST and INEC delegates over the past 12 years, I would like to pay especial tribute to the hard work of Cdre John Newell who is standing down as INEC conference chairman.”

Sir Donald Gosling Award winners
There were a record number of candidates for the Sir Donald Gosling Award for authors aged 35 or under. The award aims to encourage involvement and attendance from younger participants from the military, industry and academia. The presentations were made on the last afternoon of the conference when Patron, Vice Admiral Sir Robert Hill KBE FREng HonFIMarEST presented the prizes.

Dominic Burger of the UK Naval Design Partnering Team won the first prize of £5, 000 with ‘Unmanned Naval Aviation and its Impact on Future Carrier Design’. Dominic Burger is a Naval Architect working within the Naval Design Partnering Team, on secondment from Steller Systems Ltd.  He graduated from University College London in 2004 and has since led the concept design programmes for a range of future UK Ministry of Defence ships. He has worked within the Ministry of Defence Naval Authority Group as the Ship Stability Desk Officer and as a Senior Naval Architect for QinetiQ GRC.

R Jordy van de Mheen is currently a naval engineering officer on HMS Walrus. Prior to this, he obtained his BSc from the Royal Netherlands Naval College and his MSc in Marine Engineering from University College London (UCL).  Ian Whitelegg is a PhD researcher at UCL, undertaking a PhD on behalf of the Ministry of Defence into the impact of pulsed loads on electric power systems. Prior to this he obtained a degree in Electrical and Electronic Engineering from Loughborough University, before joining the Ministry of Defence, where he gained his MSc in Marine Engineering from UCL.

There were two third prize winners each earning £1, 500 as the judges agreed they just could not separate the two.  One of the third prize awards went to Dr Thomas Coe, Peter King, and Jonathan Hirst of the UK Naval Design Partnering Team for their paper ‘Understanding Whole Body Vibration Exposures on High Speed Marine Craft’.

Dr Thomas Coe is a Consultant Naval Architect with Frazer-Nash Consultancy currently on secondment to the UK Naval Design Partnering Team as the High Speed Craft Group Manager and Technical Lead of the Ministry of Defence’s Maritime Whole Body Vibration (WBV) Project. He has an extensive background in WBV in small fast craft having completed a PhD in the field from Southampton University and is a member of a number of international committees on the subject. Prior to joining the Naval Design Partnering Team he worked on a variety of projects for Frazer-Nash including small craft design tool development, test rig design and development of lightweight composite solutions for dismounted infantry.

Peter King is a Naval Architect with the UK Ministry of Defence who is currently working within the UK Naval Design Partnering Team as a High Speed Craft Specialist. After completing a Marine Engineering degree at Plymouth University he joined the Ministry of Defence’s Defence Engineering and Science Group graduate scheme. After completing the scheme his interest in high speed vessels led him to orientate his career around the subject and he has been involved in a number of projects including concept RIB designs and the reduction of WBV.

Jonathan Hirst graduated from Keble College Oxford in 2010 and is on a part-time secondment to the Naval Design Partnering Team where his principle interests are mathematical modelling and simulation of high speed craft environments. He is a member of the Surface Ships Signatures and Acoustics group with Thales.

Axel Homborg, Royal Netherlands Navy, the Netherlands was the other third prize winner with his paper ‘Novel corrosion monitoring using electrochemical noise’. Axel Homborg works as a PhD researcher on electrochemical noise measurements at the Royal Netherlands Navy. After graduating at the Naval Academy as a naval officer and at Delft University of Technology as a materials scientist, he held several positions as a naval officer ‘in the field’ and as a system engineer for newly-built ships.