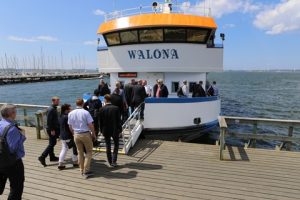 Held in Gothenburg, Sweden, the conference was rich with presentations ranging from the background of the Costa Concordia rescue operation and the US Coastguard’s Black Swan mass rescue exercise to an address from Dan- Sten Olsson, owner and CEO of Stena AB, and a moving account of rescue following 40 hours in the sea from Mohammad Mobarak Hossain, 2nd Officer of the cargo ship Hope.

The conference began with an ‘optional’ simulated mass rescue operation (MRO). The multi-bridge simulator jointly owned by Chalmers University and the Swedish Maritime Administration was used to simulate a collision between two passenger vessels and the subsequent response by a number of ships and rescue units.

Believed to be the first simulation of its kind anywhere in the world, it enabled delegates to follow the exercise from two control rooms and from the bridges of five of the responding units.

The three day conference, which was hosted by the Swedish Sea Rescue Society (SSRS) also included a live demonstration of evacuation and recovery using an Ark-type liferaft and some ‘open space’ discussion sessions which enabled delegates to raise and debate a variety of subjects within the MRO framework. A view from one of the simulator bridges

Designed to bring together people from across the maritime world – from ship owners and captains to safety experts and search and rescue officers – delegates developed and shared practical solutions, integrating preparation and planning as well as enhancing incident co-ordination and establishing supportive response systems.

“This was the most successful of the mass rescue conferences we have held to date, “said IMRF Chairman, Michael Vlasto. “We had a greater mix of delegates across the maritime spectrum and came away with a strong sense of how we can improve and develop our role as the catalyst and coordinator in relation to best practice in mass rescue situations.

“Our sincere thanks to Rolf Westerström and the SSRS team for hosting the event and to all those involved in the extraordinary rescue simulation.”

Following a keynote address from Dan- Sten Olsson, Andrew Winbow, Assistant Secretary General of the International Maritime Organization (IMO) said the IMRF’s focus was timely and important because there is a clear need to compete the global SAR plan.

The IMRF’s MRO project manager David Jardine-Smith then reminded the conference of the IMO’s definition of a ‘mass rescue operation’ as being ‘characterised by the need for immediate response to large numbers of persons in distress such that the capability normally available to the SAR authorities are inadequate.’ He said the primary aim of IMRF’s MRO project was to help fill that capability gap.

A series of presentations which followed during the June 1-3 event, included Commander Sirio Faè, Head of the Italian Coast Guard’s Operations Division, who gave a full report on the rescue operations following the January 2012 grounding of the cruise ship Costa Concordia, and Paul Culver, a Passenger Vessel Safety Specialist for the United States Coast Guard, talking about the live Black Swan MRO exercise conducted by the Coast Guard last year.

A cruise ship perspective on MRO was delivered by Hernan Zini, a Fleet Captain with Royal Caribbean International, who spoke on behalf of Cruise Lines International Association about the principle that the ‘ship is the best lifeboat’ in cruise ship incidents, whilst Mr Zhang Rongjun, Deputy Manager of the IMRF’s Asia Pacific Regional Centre, spoke about the mass rescue challenges faced in that region.

Captain Jörgen Lorén, speaking about a rescue conducted by the Stena Saga, noted that a well trained crew aboard a rescuing ship is essential and Matthew Fader of the SSRS described a multi-agency life raft experiment carried out as part of a project on small craft emergency response and survival training in Arctic conditions.

Mohammed Mobarak Hossain explained how he was rescued by HTMS Pattani of the Royal Thai Navy after being badly injured by the ships trying to rescue him and Madis Lembit, Fleet Marine Superintendent for the Tallink and Silja Line fleets reviewed the results of a number of exercises in which his company’s ships had been involved.

There were lessons to be learned from Chan Kwok-wai, Senior Marine Officer in charge of the Hong Kong Maritime Rescue Coordination Centre (MRCC), who recommended that all responding organizations should send situation reports to a central bulletin board, whilst James Instance, who manages Falmouth MRCC in the UK, gave examples of incidents occurring outside the range of shore based SAR units and Steve Scully, Senior Emergency Planning Officer for Kent County Council, also in the UK, talked of the need for responders to focus on what happens as people rescued at sea are delivered to the shore.

There were also reports from Project Manager Toni Fohlin on the Baltic Sea Maritime Incident Response Survey and Michael Baldauf, Associate Professor in Maritime Safety and Environmental Administration, who posed the question whether a focus on technology and regulations is the best way to avoid and respond to accidents and recommended human factors should be given a higher priority.

Said Bruce Reid, Chief Executive of the IMRF: “The enthusiasm of the delegates and the professionalism of the speakers meant this was a conference that yielded incredibly valuable information about how best to cope in Mass Rescue situations.

“We will use this material to inform our MRO reference library – to be launched at the World Maritime Rescue Congress in Bremerhaven, Germany next year – so others can draw from it. We will consider potential amendments to international regulation and guidance, working closely with the passenger shipping industry and other parties as well continuing to promote discussion of MROs, all with the aim of preventing drowning in the world’s waters.”

Please note that all the presentations referred to in the news release and other conference documents containing a wealth of stories and information are available on the IMRF website: www.international-maritime-rescue.org

Note to editors: The International Maritime Rescue Federation (IMRF) brings the world’s maritime search and rescue organisations together in one global – and growing – family, accredited at the International Maritime Organization (IMO). IMRF’s member organisations share their lifesaving ideas, technologies and experiences and freely cooperate with one another to achieve their common humanitarian aim: “Preventing loss of life in the world’s waters”. See: www.international-maritime-rescue.org