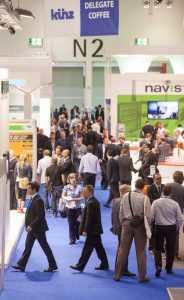 A view at the exhibition hall at London’s ExCel

London, 25.06.2014 – Container shipping lines are not performing up to the standards required of them by their customers, delegates heard on the first day of the 39th TOC Europe 2014 Conference and Exhibition, taking place at ExCel London.

“Shipping lines have to make sure they can stick to the schedules they are publishing, because lead times are getting both longer and more unreliable. And they need to educate their customer service teams to communicate better with shippers, ” he said.

Lack of communication and innovation were particular bugbears, he continued. “Cynics could say that shipping lines have become like high street banks – all takers and no makers – because other than slow-steaming and greener engines, has there been any innovation? No, ” he stated.

He added that at times the industry reminded him of low-cost airlines in terms of its relations with customers, “except that 90% of their flights arrive on time”.

Discussion on the first morning moved on to the future of liner shipping following the cancellation of the proposed P3 alliance between the world’s three largest container lines – Maersk, Mediterranean Shipping Co and CMA CGM. This was scrapped last week after it failed to gain approval from China’s Ministry of Commerce.

A view from the conference; delegates – a full house!

Martin Dixon, Director of Research Products at consultants Drewry, stated that overcapacity among container carriers will plague the industry for several years to come and the current unprecedented freight volatility will continue.

He added that the growth in global demand for container carryings was 3% last year and this is forecast to accelerate to 5% in 2014 and 2015, and 6% in 2016. However, this would not be enough to balance supply growth.

“The industry will fail to reach any sort of equilibrium until 2016, ” he said. The result, he believed, would be that carriers will be forced to miss more sailings and impose frequent general rate increases to boost rates, while also working through alliances to reduce capacity.

“Average freight rates fell 6% last year and we anticipate further falls this year, ” he said, adding that carriers were managing this loss of revenue by curbing unit costs.

Interestingly, Mr Dixon pointed out that there appeared to be a breakdown in the correlation between supply/demand and freight rates. The carriers who were to have formed P3 are already the industry leaders in terms of driving down unit costs through the deployment of ultra large container vessels (ULVCs), and this now seems to be the most important driver in setting freight rates.

Ultimately, the cancellation of P3 would postpone the stabilisation of an oversupplied industry and prolong industry fragmentation, Mr Dixon argued.

One of the predicted consequences of the ULVCs coming on stream is the ‘Cascading Effect’ whereby larger vessels will be deployed on secondary trades. This effect is already underway, said Andrew Penfold, Project Director, Ocean Shipping Consultants.

It is being driven by an excess of vessels displaced from primary deepsea trades. “Actual demand at present seldom justifies these much larger vessels – but it’s a fact of life, ” he said. And with ongoing orders of ever larger vessels the cascading effect will continue, accompanied by a push of bigger ships into the feeder sector.

This is likely to mean that productivity will become even more of a pressure point for ports. Terminal operators who cannot offer higher levels of container moves per crane hour could struggle to attract big ship calls.

The role of ports was also a focus of discussion. Joyce Bliek, Director Containers & Breakbulk, Port of Rotterdam Authority, said port authorities had a crucial role to play in increasing container throughput and logistics efficiency and so improve supply chain performance for shippers. In the case of Port of Rotterdam, the authority is evolving from being solely focused on building infrastructure into integrating that infrastructure with the needs of carriers and shippers to offer greater logistics efficiency.

“You have to look at the shared game, ” she said. This includes explaining to shippers of the alternatives available in order to move containers to their end destination. Hence the port is undertaking a number of initiatives to increase intermodal rail moves and, in particular, promoting the use of inland waterways through the Inland Links network of river terminals.

Gary Hodgson, Chief Operating Officer of Peel Ports Group, said today’s ports need infrastructure and capacity aligned to the changes in market dynamics and not just the traditional European hub ports. He stated that Peel Ports had identified a number of developments in global logistics trends that had significant implications for regional ports, such as Liverpool which is owned and run by Peel Ports.

He believed there would be more opportunities to add port rotations closer to market, away from the ‘Big 3’ of Rotterdam, Antwerp and Hamburg, while larger vessels will also increase the need for larger feeder services to regional European ports. These are all factors behind the decision of the group to invest in the new Liverpool2 terminal which will be able to cater for ULCVs, even though Peel Ports believes its target vessel size would be in the order of 8, 000TEU.