Cuxhaven presents its services at the RORO conference in London 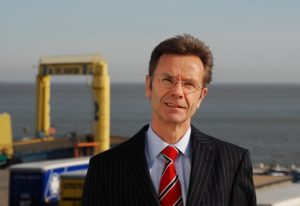 London/Cuxhaven, 26 June 2014 – Hans-Peter Zint, chairman of the Cuxhaven Port Association (HWG), will deliver new insights into the topic “new heavy-lift logistics solutions involving RoRo transports” at the RORO 2014 conference in London. The lecture’s main focus will lie on the Port of Cuxhaven’s multi-purpose orientation regarding the connection of RoRo facilities and project cargo in the heavy-lift sector.

The German sea ports face new challenges due to the German Federal Government’s decision to increasingly rely on renewable energy. The rapid expansion of on- and offshore wind energy across Europe has resulted in an increase in project cargo transports, especially in the heavy-lift sector. Since some regions are already facing shore-based infrastructure problems and roads as well as bridges are losing their heavy-lift capacity, new logistics solutions have to be found.

The Port of Cuxhaven is already characterised by flexibility and versatility: In order to circumvent the ailing infrastructure of the Rader high bridge, heavy-lift transports of tower sections for a planned wind farm in Schleswig-Holstein are conducted by sea from Cuxhaven to the Danisch Esbjerg and are then brought to their final destination per road transport. With this temporary ferry connection, the HWG-members Cuxport and DFDS as well as the Paderborn-based heavy-lift logistics service provider Universal Transport showcase how efficiently and flexibly the maritime economy in Cuxhaven is able to react to the latest market requirements.

Hans-Peter Zint, chairman of the Cuxhaven Port Association: “RoRo transports can be very diverse and can be implemented in combination with rail systems, special trailers, seagoing and inland waterway vessels. A prerequisite, next to being trimodal (waterway, rail, road), is the heavy-lift capable infra- und superstructure of the location. Cuxhaven already maintains two 350-ton RoRo ramps, a 100-ton mobile crane, a 600-ton gantry crane as well as heavy-lift capable areas and wharves. In addition, 1000-ton crawler cranes can be provided. In Cuxhaven, we are also well positioned in the high & heavy transport sector: This year, we have already more than doubled the number of heavy-lift RoRo shipments.”

The Cuxhaven Port Association will taking part as a sub-exhibitor of the port marketing company Seaports of Niedersachsen. This year, the RORO 2014 is held from 24 to 26 June in London. The exhibition is held every two years at different European locations. Established in 1978, the RORO conference is one of the leading exhibitions for the Roll-on/Roll-off sector and brings together logistics experts from around the world.

About HWG
The Cuxhaven Port Association (HWG) is an association of Cuxhaven companies, institutions and private individuals aimed at marketing and further developing the port site at the mouth of the river Elbe. The HWG is also campaigning to make Cuxhaven the most important port for offshore wind power in Germany.