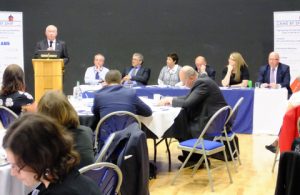 To weigh or not to weigh, that is the question: experts warn at WISTA-UK Liverpool Forum of dangers of extra-heavy shipping containers

LONDON 26 June 2014 – Maritime experts are deeply divided on how to curb the menace of overweight shipping containers, which cause severe accidents at sea and on the roads. The difficulties of clamping down on false declarations of the weight and content of boxes were underlined during a panel discussion at the WISTA-UK Liverpool Forum, part of the International Festival for Business in the port city.

WISTA-UK, part of the Women’s International Shipping & Trading Association, is encouraging debate on the critical question of container weight, alongside its Came by Ship campaign, which fanfares the importance of the shipping industry to Britain.

The audience at the WISTA-UK meeting was told that insurers estimate around 20% of all containers traversing the seas and highways are overweight and that each of those boxes represents “an accident waiting to happen.”  The cost is heavy in financial, human and environmental terms.

Speakers gave many examples of overweight containers leading to ships losing stability and catching fire, and to fatal accidents on the roads.  While ship owning and operating interests are greatly worried, interests which trade the goods say that weighing all containers ahead of shipment is unnecessary and impractical, and if made compulsory this could add as much as $5bn a year to the cost of international commerce.

The panel of experts addressing the WISTA-UK session gave their views in the light of draft amendments to Chapter VI of the Safety of Life at Sea convention. The changes, proposed by the maritime safety committee of the International Maritime Organization, would require mandatory verification of the gross mass of containers. Shippers would have to weigh either the entire container, or the individual packages and dunnage (the loose material that holds cargo in position).

Moderator for the debate, Winnie Sorensen of Wenford Ltd, a company advising on container leasing and other areas of shipping, highlighted the importance of accurate information by stressing that containership cargo accounts for nearly 60% of the value of goods traded by sea. The global container inventory amounted to some 34.5m teu, and was carried by more than 6, 000 containerships.

The first speaker, maritime mediator and arbitrator Ken McLean, listed the stark consequences of inaccurate container data: lost containers, hazards to navigation, risks to crew, loss of and damage to ships, and adverse publicity for the industry.

Mr McLean said that in many cases containers arrived for loading “half an hour before the ship is due to sail, ” and described sea conditions in which containers regularly could go over to a 30 degree angle.

He enumerated maritime casualties including that of the 15, 500teu Eugen Maersk a year earlier. The Danish-flag ship entered the Gulf of Aden in June 2013 after encountering monsoon weather which damaged containers and cargo lashings. The crew discovered a fire in a container on the aft cargo deck which damaged or destroyed 16 containers. It took some time to control the fire because the fire hoses could only tackle the outbreak up to the third tier of containers, which were stacked eight high.

In its inquiry report, the Danish Marine Investigation Board said that a collapse of the container stack was a major contributing factor to the fire. It was uncertain whether some stacks exceeded maximum acceptable load.  As the ship was going through a piracy area, most of the firefighting equipment was laid on the deck in case of attack by marauders, and took time to assemble for tackling the blaze.

The Danish inquiry made some points about the industry at large, saying that a deck officer can ask for changes in the stowage of a ship, but with time constraints and financial considerations it was doubtful they would do this.

Mr McLean quoted the shipping commentator Michael Grey who had said that when he was at sea “our paperwork is better than our ships.”

Zara Giles, Sales & Logistics Development Manager for Peel Ports at Liverpool, said that from a port management perspective, “we would love all containers to be weighed the day they get to the port.”

Bill Brassington of ETS Consulting, who advises on safety and security in the freight supply chain, cited serious road accidents in Gloucester and in London on the same day involving ‘eccentric’ container loads. “Would weighing have made any difference?  I suggest it would, ” he said.

When Mr Brassington had analysed the weight and stability of 125, 000 containers ahead of the drafting of the IMO code, it appeared that 5% of them were ‘dangerously eccentric’, with weights of up to 80 tons. “There is a likelihood that a large number of containers are technically illegal.”

Given that the Eugen Maersk was stacked eight high – for the first time – the total mass when the hull was ‘whipped’  by rough waves would create a weight of 240 tons on top of the bottom container, said Mr Brassington. Containers are tested to comply with the IMO convention limit of 192 tons. Only a slight change was needed for a stack to become unstable. He said that on an average voyage from Hamburg to the east coast of the US a ship will roll 186, 000 times, thereby exaggerating the mass of the cargo.

Mr Brassington referred to instances of blocks of marble being carried as cargo crashing through the bases of container s. One block fell through on to a barge and through the barge to the bottom of the harbour. Fortunately no-one was underneath that block, “but I am sure it does happen.”

On the roads, it was very easy for a truck carrying a container to topple over – some vehicles are loaded in excess of their approved safe carrying weights. He urged: “Never overtake a container vehicle when it is going round a bend – never!”

Weighing, as opposed to calculating, was the only way of obtaining the gross mass of a container. “Any calculation method has a degree of error. Whatever they weigh may become dry or wet, but with the right equipment weighing can be done and identify the exact centre of gravity.”

He claimed that about 1% to 1.5% of all containers were seriously overweight, and warned: “People do abuse the system even if they weigh.”

John Dickinson, head of the Nautical Institute delegation to the IMO, recalled that after the grounding in 2007 off Cornwall of the MSC Napoli, 20% of the containers were found to be more than three tons different from their declared weight – the largest difference was 20 tons. The draft amendment to Solas would still leave the system open to misuse and fraudulent paperwork, Mr Dickinson feared.

He spoke of the loss of the MOL Comfort, which broke up and sank in the Indian Ocean in June 2013. The cause has not been established, and Mr Dickinson said it would have been very useful to know the weight of the containers on board. This was a new ship, of 8, 000 teu, he said.

Mr Dickinson spoke of the dilemma of ships’ officers asked to accept cargo they suspected was wrongly described. “To stop and say ‘I am not taking this, ’ takes a very brave captain or chief engineer. There is a lot of concern out there that I am trying to bring to your attention.”

Chris Evans, cargo supply chain commercial manager at DP World London Gateway, said that his company had a strong belief in safety and “it will not be compromised.” He said: “That means everybody in this industry has to make a proper declaration. But people don’t play the game. People are not clear about what they put into containers. This covers the globe. It is important that everybody weighs, and to weigh with accuracy there is a need to have it documented, which is a separate industry question.”

Mr Evans went on: “You should not walk away thinking that [dealing with ‘rogue’ containers] is easy. Some companies are much less sophisticated than those in the UK and Western Europe.”

He called on his audience to imagine the task of weighing hundreds of export containers within a short time frame. Delivery was two to three days before a vessel sails. “In the end, trust is the foundation of trade, otherwise you would not have globalisation as it is now. You cannot expect to weigh every single container in the same place, otherwise you get a bottleneck, ” he said.

He asserted: “By and large it is the cargo companies who misdeclare.” Pressure to accept containers came from big customers.

Alan Robertson, of Webster Robertson, a container project consultancy, called for greater focus on the start of the operation and the role of shippers.

Mr. Robertson said that the US Congress for some years had tried to install a programme to X-ray every single container. “It has been put back and the latest indication is that it is just not going to happen, and with the [potential] logjam in the ports it is not practical.”

From the auditorium it was suggested that some delay was a price worth paying for safety and security. “Yes it will slow things down, ” said one questioner, “but I am quite happy to accept this fact. When something big [i.e. disastrous] happens, then I am sure we will find the time and money.”

Mr Evans said about extending compulsory weighing: “If you are going to do it properly you have to do it in the right location. It needs to be done before [the container cargo] gets to the port.”

The WISTA-UK event took place at Port Academy Liverpool, part of Hugh Baird College of Further Education, which has close links to maritime and other industry on Merseyside.

Women’s International Shipping & Trading Association (WISTA) is an international organisation for women in management positions involved in the maritime transportation business and related trades worldwide. It is a major player in attracting more women to the industry and in supporting women in management positions. With networking, education and mentoring in focus, WISTA seeks to enhance members’ competence and empower career success.  WISTA-UK is the oldest of all National Associations and was founded in 1974.

WISTA is growing and currently counts over 1.800 individual members in 34 national WISTA Associations.

At the annual conference, WISTA will choose its international Personality of the Year, based on the criteria of furthering the WISTA values of Professional, Dynamic, Open-Minded and Committed.

Each national WISTA association is entitled to submit the name of one person, male or female, for the award. Previous winners in the UK who were also elected as International WISTA Personalities are Katharina Stanzel, managing director of INTERTANKO (2012) and Suzanne Williams, Hostage Negotiator (2010).