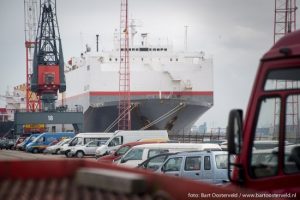 Brussels, 27 June 2014 – Belgian authorities released today the Japanese owned car-carrier that has been sitting in detention at the port of Antwerp for nearly a month. After having been alerted by the NGO Shipbreaking Platform, a coalition of environmental, human rights and labour organisations, that the ship had been sold for scrapping in India [1], the Flemish Environment Ministry seized the end-of-life car carrier Global Spirit. The ship was today allowed to leave the port of Antwerp for recycling in Turkey, a destination allowed under European waste law [2].

“We applaud Belgium for having stopped the Japanese ship from sailing to Alang, India, where the vessel would have been broken under very hazardous conditions, an export which would have been illegal under European law, ” said Ingvild Jenssen, Policy Advisor of the NGO Platform on Shipbreaking. “On the shipbreaking beaches of Alang labour rights are poorly respected and pollution laws are weak or not enforced. The conditions we see in India would never be allowed in Europe or in Japan.”

According to the European Union Waste Shipment Regulation, only if all hazardous materials, such as asbestos, residue oils and toxic paints, are removed from the Global Spirit can it be allowed to be exported to South Asia. The Regulation was designed to prevent the environmental injustice caused when rich countries export their toxic wastes to impoverished countries that lack the technology and infrastructure to manage such wastes.

“We now call on the Japanese owners of the ship, Mitsui O.S.K. Lines Limited (MOL) and Nissan Car Carriers (NCC), to find a sustainable solution for their entire fleet, not only the Global Spirit for which they have been caught red-handed, and adopt a company policy on ship recycling that will ensure the safe and green recycling of all their ships off the beach, ” said Ingvild Jenssen.

Last year the Japanese ship owner MOL sold six end-of-life ships to South Asian shipbreakers [3], prioritising the highest price for the ships and ignoring the harm done to workers, local communities and the environment. The charterers of the Global Spirit, Höegh Autoliners, who are also 20 percent shareholders in NCC, have already adopted a sustainable ship recycling policy for their ships requiring them to be broken ‘off the beach’. More and more progressive ship owners are refusing to sell their end-of-life ships to substandard beach breaking yards and the new EU Ship Recycling Regulation has set a clear standard for safer and greener practices that effectively rules out the beaching practice [4].

“Also under the new EU Ship Recycling Regulation the beach breaking yards of India will not be accepted as the scrapping destination for European flagged ships. This is a clear signal to ship owners that it is high time they shift from substandard breaking to modern and sustainable recycling of their vessels, ” said Ingvild Jenssen.

[2] In India, Bangladesh and Pakistan ships are dismantled on tidal beaches whose soft sands cannot support crucial safety measures such as heavy lifting or emergency response equipment and which allow pollution to seep directly into the delicate coastal zone environment. No country in the developed world allows ships to be broken on their beaches. While shipbreaking can be done in a safe and clean way with proper technologies and infrastructure, most ship-owners choose to sell their ships for significantly greater profit to substandard yards operating in countries without adequate resources to provide safeguards and infrastructure to manage the hazardous materials found within the ships’ structure. On the South Asian shipbreaking beaches, vulnerable migrant workers, many of them children, break apart massive and toxic ships by hand, often without shoes, gloves, hard hats or masks to protect their lungs from asbestos, and poison fumes. The International Labour Organization (ILO) considers shipbreaking on beaches to be among the world’s most dangerous jobs.

Damen, MTU and SVITZER will launch the world’s first RSD CNG tug in 2016