Port of the month: the Port of Livorno 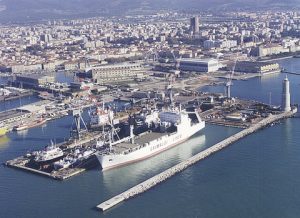 Livorno is an important cruise port. Can you draw us a picture of the Livorno cruise port. ESPO wants to develop a code of practice for European cruise ports. Any practices in Livorno that could help other cruise ports?

Livorno Port for Tuscany is mainly a destination port but partial turn-around calls are increasing. In 2013, Livorno port registered 420 calls and 736.516 passengers. Porto 2000 facilities currently include not only 11 port berths for cruise ships and ferries, 100.000 sqm. cruise and ferry operation areas, 3 cruise and ferry terminals, 15.000 sqm, but also parking areas.

The Port Authority and the Municipality of Livorno have approved a project to extend the passenger port, which will provide new docks and a structured reception dedicated to passengers. In particular, priority has been given to berths for cruise ships in the Alto Fondale, on docks 46-47.

Pisa International Galileo Galilei Airport, located only a few kilometers from Livorno, is well connected to many European destinations such as the UK or Germany. Moreover, the splendid art cities of Florence, Pisa, Siena and Lucca, can be reached from Livorno’s berths in a short time. World famous vineyards in Bolgheri, beaches and natural parks of Mediterranean Tuscany, and Etruscan ruins represent alternatives to classic Tuscany tours.

Livorno cruise terminal has been applying since 2012 the Unified Mediterranean Cruise Ship Berth Booking and Confirmation Process, that is a MedCruise Good Practice, for managing the relationship with the Cruise Lines for berth booking.

With ESPO, we are currently working on a research agenda for ports. In June, the Port of Livorno organized a seminar on technological innovation in ports and terminals. Livorno is clearly putting innovation high on its agenda. Do you have projects in the pipeline?

The ‘Energy and Sustainability’ framework encompasses the GREENCRANES project (just completed). The result of this project is the development of a Reach Stacker prototype powered with alternative fuels (Liquid Natural Gas). The second, theMONALISA 2.0 project, seeks to develop a prototype and pre-deployment solutions oriented to implementing a Sea Traffic Management (STM) for the maritime sector.

Furthermore, the Livorno Port Authority is strengthening its partnerships with Universities, Research Centers and “Knowledge Providers”, in order to build a network for innovation. We strongly believe ports can play a major role in innovation and EU Horizon 2020 can lead us to impressive enhancements in port efficiency, safety and sustainability.

The Port of Livorno is situated on the Scandinavian-Mediterranean TEN-T corridor. What does this mean for your port?

The port of Livorno wants to take opportunities offered by the integration within the Core network, notably in the Scandinavian-Mediterranean Corridor. This integration requires an additional effort for the port community and obviously for the Port Authority itself to develop a strategic approach towards the hinterland and especially towards the relevant stakeholders for improving the physical connections along with logistic services. The Port Authority of Livorno and Regione Toscana, with the support of the Italian Government have therefore committed to ensure efficient interconnections with the hinterland by realizing short missing links near the port. As a part of this broader strategic view, the upgrading of maritime accessibility is also envisaged: the Port Master Plan subsequently foresees the completion of a new container terminal, called ‘Darsena Europa’, capable of handling the newest vessels entering into service.

How are the relations with the North African ports? Are you cooperating?

Northern Africa represents a major trade partner for Livorno. Ports on the Southern shore of the Mediterranean have extensive maritime connections with Livorno: port cooperation is therefore necessary for trade facilitation and for further improvement of the commercial ties. In recent years, the Livorno Port Authority has actively sought the cooperation of many ports in the South Mediterranean, notably those of Egypt (Alexandria, Damietta) and Algeria (Bejaia and Oran). In particular, Livorno Port Authority has established strong ties with the Agence Nationale des Ports (ANP) of Morocco, aiming to develop joint development activities, especially in the field of innovation, strategic supply chains, training and port governance. We believe that these activities have not only given a chance to improve the know-how of involved partners, but also have contributed to the creation of a common Mediterranean framework for port related issues. This is the reason why Livorno Port Authority yearly organizes an Euro-Mediterranean Forum, usually in November, for enhancing the debate on ongoing trends within the Mediterranean dimension.

What are the big challenges ahead for the Port of Livorno? Will the upcoming alliances in the shipping sector influence the business in your port and how will the Mediterranean ports in general be affected?

The port of Livorno is one of the most important Italian ports, ranking first in Italy in many trade flows such as Ro-Ro, new cars and paper pulp. Nonetheless, Livorno has to face several important issues to  strengthen its strategic position along the main trade routes. In particular, as many other Mediterranean ports, Livorno has to cope with the ongoing trend of the shipping industry towards ultra large containerships and increasing market concentration. In this respect, the completion of the new ‘Darsena Europa’ and the establishment of an industrial partnership, under a PPP scheme, will undoubtedly contribute to reinforce the competitiveness of the port in relation to global maritime evolution. Moreover, Livorno has to deal with the issue of connections with its hinterland, especially with reference to the creation of intermodal linkages with the logistics platforms of Central and Eastern Europe.

There are serious risks that the alliances between big players will create problems to our port as well to many other Mediterranean ports. Luckily, at least from our point of view, the P3 has been stopped and that would allow new possibilities of development also for ports like Livorno which are unable to host megaships. P3 would certainly touch only a few ports in the Mediterranean and the ones with the less important services. It is to be admitted that the Mediterranean has a very marginal role in the P3 program. Therefore we think that this is the moment to react and to start with cooperation between Mediterranean  ports, to push for a strong development  of the motorways of the sea :in one word to develop a common policy of the ports  of the  whole Mediterranean  sea.

Honestly we think that the common idea “big ships mean big ports” should have a sort of limitation , or  at least an open and frank discussion regarding all the connected problems (cost of investments, environmental  problems , role of the public bodies etc) ; in any case the  idea is not suitable for the greatest majority of the Mediterranean ports.

In our masterplan, which has recently been approved , we have proposed a new terminal (darsena europa) with a significant capacity, in any case not in condition to receive megaships of 18.000 TEU or even more. But if you think about it reallistically: who in the Mediterranean sea can receive a vessel of 20000 TEU?

Do you have a message for the Italian Presidency?

The Italian Presidency should be much more involved in the port policy and should not leave all initiatives only to the Commission. Of course they should accelerate the work on port regulation in the Council. Maybe it is the moment for a general  reflection on the whole shipping world, comprehensive of  pure shipping world (what happens in the sea side…)and port policy(what happens on the land). It is may be utopian, but keeping the question separate has not given great results, up to now. Shipowners make their policy and thinking that ports will always follow is no longer acceptable.