1st July 2014, London: The UK’s Parliamentary Under-Secretary of State for Transport and Wimbledon MP, Rt. Hon. Stephen Hammond MP has paid a visit to DP World London Gateway to congratulate the team on their success.

During Mr Hammond’s last visit in January 2013, the port had only just started to install the first of its yard cranes. Since opening in November 2013, DP World London Gateway has seen a continued increase in ship traffic and is due to see a new West Africa service start in a few weeks.

During the winter, DP World London Gateway accepted a number of unplanned calls by ships that were not able to call at their intended UK port due to bad weather and port congestion.

Mr Hammond toured DP World London Gateway, which opened its second of six berths in May and learnt about two large distribution centre buildings, the Common User Facility and the Prologis development, that are about to start construction in the London Gateway Logistics Park.

The Minister, who has responsibility for shipping, ports and rail greeted some of the 400 team members now working across a number of departments including terminal operatives, health and safety, engineering apprentices, IT, planners and administrators, to congratulate them on their hard work that has led to the successful launch of the UK’s first major port in 30 years.

“I want to congratulate the DP World London Gateway team for their remarkable success in taking a brownfield site and turning it into a world-class state of the art deep-sea container terminal and logistics park.” 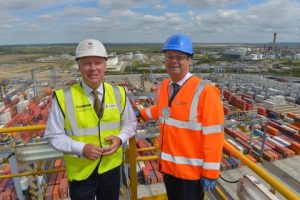 Simon Moore, London Gateway CEO and Rt Hon. Stephen Hammond MP look out over the busy port while a container ship is unloaded

DP World has a portfolio of more than 65 marine terminals across six continents (1), including new developments underway in India, Africa, Europe, South America and the Middle East.

DP World has a dedicated, experienced and professional team of 28, 000 people serving its customers around the world, and the company constantly invests in terminal infrastructure, facilities and people to provide quality services today and tomorrow, when and where customers need them.