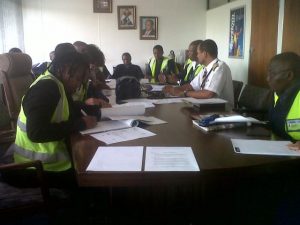 The ITF-affiliated Swaziland Transport and Allied Workers Union (STAWU) has saved over half the jobs at risk of redundancy at Swaziland Airlink.

STAWU approached the ITF civil aviation section for assistance, and received a copy of the International Air Transport Association (IATA) report Profitability and the air transport value chain. STAWU discovered that ground handling is, according to IATA, one of the more profitable arms of the aviation business – making it in Swaziland Airlink’s interest to keep that section of the business in-house.

STAWU industrial relations officer Sticks Nkambule who facilitated the discussions said: “We are pleased with an achievement of this magnitude. We commend all stakeholders in the process and the ITF, which provided apt technical know-how in this respect. Airlink’s forthcoming relocation from MTS to KM3 airport has not only brought job insecurities but also critical profitability questions for the airline. To this end we further implore key players to tread with due care in that regard.”

ITF civil aviation section secretary Gabriel Mocho Rodriguez commended STAWU on their swift action, and described the protection of over fifty percent of jobs at stake as a massive victory. He reiterated the union’s concern that the government must pay careful attention to concerned raised in IATA’s report when reinvesting in the Swazi aviation sector.