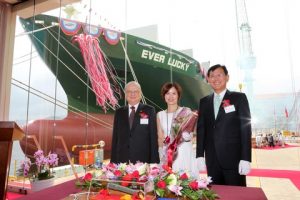 July 4, 2014 – EVER LUCKY, the 8, 452-TEU L-type containership of Evergreen Line, was christened by Mr. S.S. Lin, Evergreen Group’s First Vice Group Chairman, at the Samsung Heavy Industries shipyard today. It is the twentieth L-type vessel to be built by the yard.

Ms. Liu, Su-Tsen performed the official rope-cutting, wishing the ship fair winds and safe voyages. Owned by Greencompass Marine SA (GMS), EMC’s Panamanian subsidiary, the new vessel will be delivered on the 8th of this month and be deployed on Evergreen’s Far East – US West Coast service.

In his speech Mr. Lin said, “It was in July 2012 that we took delivery of the first L-type vessel from Samsung Heavy Industries. Each of the newbuildings since has been delivered perfectly to schedule and has been performing very well. Because of this smooth implementation of our fleet renewal program, we can continue to provide quality service to our customers and enhance the competitiveness of our operating fleet within the global market.”

In 2010 Evergreen Group commenced its current fleet renewal, which in total includes 30 L-type vessels, 20 of which have been ordered from Samsung Heavy Industries and the other 10 from the CSBC Corporation, Taiwan. With the delivery of EVER LUCKY Evergreen concludes its L-type project with Samsung and adds the 25th such vessel to its operating fleet. The remaining 5 newbuildings are being built by CSBC in Taiwan and will be delivered by the third quarter of 2015. While integrating the new ships into its fleet, Evergreen is planning to return two dozen chartered vessels during the course of this year and next.

The design of the L-types incorporates Evergreen’s “Greenship” concept. Utilizing the latest technologies for ship construction, the vessels are equipped with numerous environmental features to cut fuel consumption and to reduce the emission of greenhouse gases.

To meet increasing market demand, Evergreen is gradually upgrading its operating capacity. In spite of this increase in overall tonnage, the carrier expects to maintain the same level of total fuel consumption as last year thanks to the new ships’ improved efficiency. The result is a very effective reduction in unit cost which in turn enhances Evergreen’s market competitiveness.