A Greek Liveryman in the Worshipful Company of International Bankers. 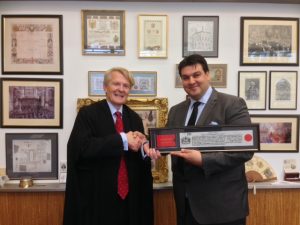 Omiros Sarkias receiving the Freedom of the City of London

At 35, Mr Sarikas* is one of the youngest Liverymen in the City of London. 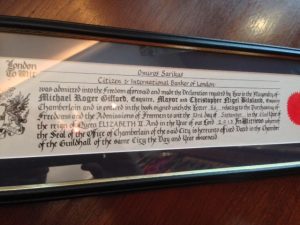 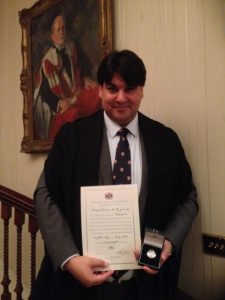 At AHV, Omiros covers global M&A and private equity-backed transactions. Since his arrival, the deal team has increased its mean deal size and has been named ‘Corporate Finance Firm of the Year’, ‘Cross Border M&A Advisory of the Year’ and ‘Middle Market Investment Bank of the Year’ at a number of awards, including ACQ, IFR, FI Global and DealMakers Monthly. Latterly, the firm has been recognised as a ‘top deal maker’ world-wide.

Omiros has completed over 40 transactions to date for private and public businesses spanning sectors such as TMT, FIG, Hospitality, Healthcare, Energy and Industrials, for companies including BT, Vodafone, Samsung, Samsung Telecom, Nintendo, Alchemy Partners, Morgan Stanley, Unither Pharmaceuticals, EDF and Klopman.
He has authored numerous articles on M&A and PE/VC, often collaborating with academics from the universities of Oxford and Harvard in the process, and is a frequent conference speaker. Moreover, his M&A work with Cass Professor Scott Moeller has been extensively covered in the financial press (over 200 quoted examples), including the Financial Times, The Wall Street Journal and Bloomberg TV. He has also been invited to present his findings to FTSE 100 CEOs and executives at Goldman Sachs, Citibank, JP Morgan, Lehman Brothers, RBS, UBS and the UK’s Law Society.

Omiros has often served as a keynote speaker at conferences addressing M&A and PE/VC activity throughout South East Europe, following his transaction experience accrued in the region. He has spoken alongside the Greek Minister of Development (12th VC/PE Forum), the Greek Minister of Health (FT Future of Insurance Conference), the Heads of the EIF Jeremie funds (PE Forum III) and leading Greek bankers and politicians (Grexiting the Crisis Summit). He has been covered and interviewed by the financial press, including SKAI TV, ANT1 TV, Kathemerini, Naftemporiki, CFO Magazine, Sofokleous and Ethnos amongst others. He has also acted as a judge alongside peers from Goldman Sachs, NBGI and Angel-Labs at ‘Reload Greece’ investment summits.

Holding several qualifications, Omiros has read Corporate Finance at the London Business School (LBS), Business at Cass and Management of Information Systems at the London School of Economics (LSE), amongst others. During his studies, he was awarded the first prize by the British Computer Society for a student essay on Professional Ethics, a three-year PhD scholarship, a number of doctoral research grants, two MBA financial awards and first prize in three MBA competitions. He has also served as a coach for the award-winning LBS team in the Wharton PE Buyout Case Competition in New York City, a mentor for the UC Berkeley Global Social Venture Capital Competition (GSVC) and a judge for the UNC Venture Capital International Competition (VCIC).Omiros started his career as an academic and advisor to the UK government and the EU. Upon exiting his doctoral group to follow a commercial path, he was awarded a Visiting Fellowship which is still extant. He then joined a strategy consultancy, where he managed to fast-track through the three-level Analyst programme and subsequently was awarded executive share options prior to his MBA leave. As an M&A professional, Omiros is CCF qualified and is a member of the Chartered Institute for Securities and Investment, the UK Hellenic Bankers Association, the Worshipful Company of International Bankers and approved by the Financial Conduct Authority.

Omiros has a passion for philosophy, politics and economics and is a Fellow of the Royal Society of Arts. Previously, he was President of three student societies, two LSE postgraduate clubs, served as Committee Executive for his MBA cohort and has been involved with numerous LBS finance-related clubs. Omiros also enjoys competitive sports. He was an LBS Sailing Team crew member at the IESE Spring Games in Barcelona, supported his class delegation for the HEC Paris MBA Tournament and was a varsity basketball player and Greco-Roman wrestler during his secondary education at Tasis and ACS international schools (IB Programme).

Omiros was a co-judge for the Financial Times Investment Banking Awards of 2010 in the M&A and IPO categories. In July 2011 he was recognised as the first ‘M&A Young Gun’ of the year by ACQ magazine, in July 2012 he was admitted as a Freeman of the Worshipful Company of International Bankers, in September 2013 he progressed to receiving the Freedom of the City of London. In July 2014 he was admitted as a Liveryman.