The Shipping Professional Network London (SPNL) recently hosted another great event, courtesy of Mazars, who hosted and sponsored the event. Members and guests were warmly welcomed and had the pleasure of two guest keynote speakers from Mazars; Howard Shaw, Head of Anti-Bribery and Corruption Services  and Neil Hutchison, Manager, Human Rights team. The event took the format of two fascinating and engaging insights; Anti-Bribery and Corruption in the maritime industry and the benefits of business transparency in relation to Human Rights.

Howard Shaw opened the evening by giving a case example of how Mazars dealt with a client situation (which could not be named for legal reasons) and how they advised that client on managing bribery and the integrity risks in a foreign jurisdiction. Howard focussed on facilitation payments and demonstrated why they are a risk to your business. Commonly called ‘grease payments’, these are unofficial payments to have official business done. The idea being to encourage an employee to fast track whatever you want done – like speed payments.

Howard Shaw explained, “Making unofficial payments to have official business done may make sense. Why is that a problem for your industry? Let me take you to this deep sea port somewhere in Africa. You will know how difficult it can be to get your cargo unloaded and loaded and get your ships through the process portside. This port is grossly undersized and over extended in capacity and cannot cope with the volumes of trade. Some of these materials are perishable goods, and can sit on the docks for months. So if you’re a ship owner and shipping goods, how do you get it from the ship to the client as quickly as possible? The traditional way is to pay facilitation payments.” 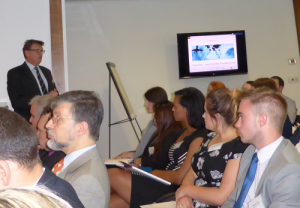 A statement from the Serious Fraud Office (SFO) states “Facilitation payments are illegal under the Bribery Act regardless of their size or frequency. Any local custom must be disregarded unless permitted or required by the written law applicable to the particular country”.

“The UK Bribery Act also places at risk companies that fail to prevent bribery for the benefit of the company. If your company is registered off shore and you have an office here, you’re captured by this law. If you have a trading footprint in the UK and anyone, irrespective of who they are, is performing services for your company, anywhere in the world, and offers or pays a bribe to anyone, even if it’s through a third party, for the benefit for your company, your company is liable. There are very few exceptions. Having said that, we are yet to have a major corporation prosecuted here. However you may have read of a number of investigations currently underway.” Howard concluded.

Neil Hutchison followed on from Howard Shaw presenting an insight into the relationship between human rights and the maritime sector. Neil explained that the maritime industry can make a fast, noticeable difference by changing policies and implementing them.

MAZARS is co-leading a project called the ‘Research and Assurance Framework Initiative’ (RAFI). It is a joint project between themselves and the not for profit organisation, Shift. Shift is largely constituted by the team that assisted John Ruggie, former United Nations Special Rapporteur.   This team drafted the UN Guiding Principles on Business and Human Rights that are the framework by which companies and governments protect and respect human rights. Neil explained that the RAFI consists of two parts – how business enterprises should disclose their alignment with the UN guiding principles and how assurance can be provided in respect of their disclosure under the first part. It is already the case that, in the UK, all listed companies must report on their human rights performance, social risks, employee matters, environmental risks and anti-bribery and corruption. The project is on-going and they hope to release a first draft of the reporting framework by the end of the year.

To quote the UN Guiding Principles on Business and Human Rights; “Business enterprise should respect human rights. This means that they should avoid infringing on the human rights of others and should address adverse human rights impacts with which they are involved.”

After discussing and giving examples of several corporate human rights violations, Neil talked about the UN guiding principles three pillars – Protect – Respect – Remedy. He described the unfortunately lack of a clear UK government policy and the inherent vagueness of legislation in the UK. Neil encouraged businesses not only to have a moral duty to promote human rights but to also “know and show” thereby promoting business transparency. “Why do companies want to respect human rights? Reputation is paramount, and has a financial impact on your business; it also has a liability aspect to it too.” He said. “As a business you must go in and assess your risks, because otherwise, as with the Bribery Act, you have no defence. Doing something is not enough, you have to do everything that is in your power otherwise you are in serious trouble – and above all “know and show”.

In their work with the Human Rights at Sea initiative, Neil highlighted the recent statement by German President Gauck, in his opening speech at the annual Berlin symposium on international refugee protection that ‘human rights apply on the high seas‘ and that ‘the high seas are not a lawless area’.  Therefore the maritime industry is no different to any other industry and human rights apply to everyone. The ILO has several relevant conventions however these don’t cover everything and Mazars, as part of  the Human Rights at Sea initiative, is committed to working to promote respect for human rights in the maritime sector, “The Human Rights at Sea initiative is designed to bring the UN guiding principles into the maritime world, now that’s no easy feat, but there’s a group of not for profits, companies and associations involved, and with government support along with companies like Mazars, we are working together to make sure this happens.”

Following on from the presentations, members had the opportunity to address the keynote speakers with any questions. Claudio Chiste, SPNL Chairman from Investec Bank shipping & marine finance, thanked both speakers for their presentations and Mazars for their ongoing support and generosity. A thoroughly successful event!