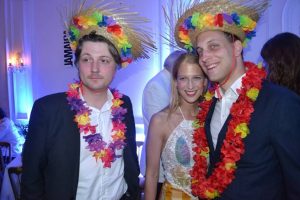 Lady Gabriella Windsor, performing under the name of Ella, by which she is known to family and friends, has made her singing debut, at a charity party at the Polish Hearth Club, Kensington.

Showing no signs of first night nerves or shyness, Ella – the daughter of Prince and Princess Michael of Kent – swayed in time with the band on stage with reggae singer Alexis Mercedes.

Ella sang two popular reggae numbers Darling and Here I Am, accompanied by reggae band the Allstars, put together for the occasion by jazz musician Ciyo Brown, and fronted by lead singer Matt Henry.

The band was sponsored by Kirsten Rausing who breeds race horses and has a stud farm at Newmarket, and who on the night looked stunning in a floor-length jade green gown and matching jewellery.

Under the title Golden Eye in tribute to the James Bond movie, the Jamaican-style private party on June 26 2014 for 250 guests was organised to raise money for the Mary Obolensky Underwood Leukaemia Foundation, the Chain of Hope, and the Sir John Golding Centre.

The Obolensky charity was founded by Antony Underwood in 1987 in the name of his wife Mary following her death from leukaemia the previous year.  Mary Obolensky was born Princess Mary, and Antony formed the foundation to finance a research programme at the London Clinic which continues today and is sponsored by Anglo American Foundation.  The organisation helps people go through treatment and buys medical equipment for hospitals and clinics.

The charity event was put on by Ella’s uncle and aunt, George, the Earl of St Andrews (elder son of the Duke and Duchess of Kent) and his wife the Countess Sylvana; Her Excellency Aloun Ndombet-Assamba the High Commissioner of Jamaica; and society portrait painter Barbara (Basia) Kaczmarowska Hamilton and her husband Ian, all of whom were in attendance.  Guests sported a variety of dress, including black tie and fancy dress, and Jamaican green was much in evidence.

For the party, Basia Hamilton had hand-painted several silk dresses in Jamaican colours of green and yellow for guests.

Ella was accompanied to the party by her brother Lord Frederick (Freddy) Windsor, and her cousins Lord Downpatrick (Edward) Windsor and his sisters Lady Marina Windsor and Lady Amelia Windsor who are the children of George and Sylvana.

The young royals congregated at times under the canopy on the roof balcony of the club overlooking Exhibition Road, South Kensington, directly opposite Imperial College.  The sound of the reggae band and the singing could be heard for some distance down the road.

The band played reggae adaptations of 1950s, 60s and 70s music, and Jamaican rum punch was served across the bar throughout the evening.

After a fine supper of traditional Jamaican spiced chicken, laid on by the new Polish Hearth Club restaurant manager, Count Jan Woroniecki and his staff, guests danced till midnight to such tunes as Ring of Fire, recorded in the late 1960s by Johnny Cash.

There are close links between the fictional James Bond, the Hamiltons and Jamaica.  Ian Fleming wrote his James Bond thrillers on his Jamaican estate, named GoldenEye.  General Sir Ian Hamilton who lived at No 1 Hyde Park Gardens, London, and who led the failed attack at Gallipoli in 1915, was the godfather of Fleming, the author’s father having served with the general.  General Sir Ian’s nephew, the present Ian Hamilton, owns a sugar plantation in Spanish Town, Jamaica, and his brother Alexander and wife Erica own Caymanas House in Spanish Town, where the Hamilton family have spent many holidays.  Her Late Majesty Queen Elizabeth the Queen Mother visited Caymanas House and the letter she wrote in that connection is today treasured by the Hamiltons.

Much of the hard work to make the event a success was put in by the chairman of the Polish Hearth Club, retired British Army Colonel Nicholas Kelsey; Lady Belhaven & Stenton (Malgosia) who is the wife of Robert (Robin) Hamilton, 13th Baron Belhaven & Stenton; and Mrs Kristina Matson, the last two having spending the evening on the reception desk, greeting guests for five and a half hours, supported by military historian John Lee.