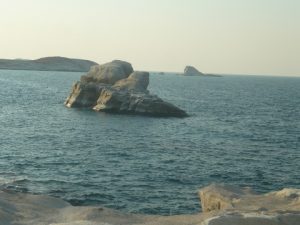 the aftermath of an earthquake, an island appears..

Friday 18 July 2014 – They’re a daily occurrence, and while the mildest tremors go unnoticed, the most violent tear the countryside apart, reduce cities to rubble and generate terrible personal and economic losses. Better buildings, infrastructure and emergency responses all play a key role in mitigating earthquake risk. (source: Lloyd’s of London)

Statistics show the deadliest ten earthquakes between 1980 and 2012 killed more than three quarters of a million people, while the ten costliest over this period generated losses of $557bn. Less than 15% of this was insured. What is perhaps most concerning about these figures, is the difference between where the biggest fatalities and the highest costs arise.

Although three of the costliest temblors happened in New Zealand, they resulted in relatively few fatalities. In one of the earthquakes no one died, in the second one person died, and in the third 185 people lost their lives. The 2004 earthquake in Haiti, however, saw 222, 570 fatalities – but did not feature in the top ten costliest earthquakes. Not only do the least developed countries bear the heaviest human toll – they also have the least cover in place to get them back on their feet. Swiss Re estimates the insurance contribution to the Haiti quake was 1% of the total loss, while the industry covered 81% of the losses in the 2010 earthquake in New Zealand.

It is clear big improvements could be made – both in terms of the physical protection in place, as well as the insurance safety net that exists to fund rebuilding in the aftermath of disaster.

From the way we design and construct buildings to the way we seek to predict major seismic events, there is much to do. And it has already begun. In 2000, the Turkish Government created the Turkish Catastrophe Insurance Pool and insisted on mandatory cover for residential buildings in urban areas. But, the cover extends only to physical property damage and not contents, personal injury or commercial loss.

Similarly, advances have been made in the fields of architecture and engineering. But getting the latest technology implemented into construction processes in the poorest parts of the world is a difficult task.

Data from the US Geological Survey National Earthquake Information Centre shows that between 2000 and 2012, there were two earthquake deaths in the US, while globally there were 813, 856. The lower fatality record was delivered on the back of better buildings, infrastructure and emergency responses. It is this level of resilience that every country in the world should be aiming for.

To date, science has been unable to anticipate where and when the next earthquake will strike, but this may be about to change.

Scientists can identify earthquake signatures from electromagnetic and thermal activity prior to a major event. And they are now working to develop that understanding into a predictive capability. The UK and Russia, for example, are partnering on a joint initiative that will send satellites into orbit to monitor changes in electromagnetic activity – and hopefully enable scientists to pinpoint the location and time of a strike.

Dhiren Kataria, Head of In-situ Detection Systems at UCL’s Mullard Space Science Laboratory, explains the technology behind the TwinSat Project: “During the earthquake preparation phase, there are a number of things happening on the surface of the earth that propel electromagnetic signals into the environment. You can catch these signals using plasma sensors and electromagnetic field sensors from space with the advantage that satellites provide global coverage as opposed to ground-based sensors.”

The challenge is then to isolate this data from similar signatures created by solar storms and human activity, and develop a communications network that can issue effective warnings to areas at risk throughout the world. The goal is to predict an earthquake with a magnitude upwards of six, hours and even days before it happens. However, says Kataria: “In order to build that capability and not make false predictions, there is a considerable amount of work to be done.”

The Alexandros T: Court of Appeal bows to the Supreme Court and upholds settlement