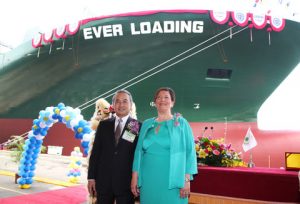 July 18, 2014 – Evergreen Group today held the naming ceremony for EVER LOADING, the sixth of its L-type vessels to be built by CSBC Corporation in Taiwan. The ceremony took place at CSBC’s Kaohsiung shipyard and was officiated by Mr. Bronson Hsieh, Evergreen Group’s Second Vice Group Chairman. The official rope-cutting of the new 8, 508 TEU vessel was performed by Ms. Michelle Nardulli, a member of the Board of Directors of Italia Marittima, Evergreen’s Italian subsidiary.

Mr. Hsieh said in his speech that the vessel’s name symbolizes Evergreen Line’s target for continued business success. He also mentioned that the L-type vessels are very flexible in fleet deployment. With the smooth implementation of Evergreen’s fleet renewal program, such vessels have been widely deployed across the carrier’s service network, including trade routes from the Far East to Europe, Middle East and the US West Coast.

In the latest development, Evergreen recently made use of the 8, 508 TEU ships to launch a new Asia – US East Coast service via Suez Canal with strategic partners. Currently the L-class vessels are among the maximum size of containerships that can pass under the Bayonne Bridge and call at New York port. Therefore, the service enables Evergreen to lower unit costs and enhance competitiveness in the Asia – US East Coast trade.

In 2010 Evergreen Group commenced its current fleet renewal program, which in total includes 30 L-type vessels. With the delivery of EVER LOADING, Evergreen adds the 26th such vessel to its operating fleet. The remaining four newbuildings are being built by CSBC and will be delivered by the third quarter of 2015.