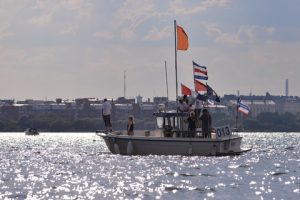 23 July 2014 – America’s Nevin Snow was unbeatable on the opening day of the ISAF Youth Match Racing World Championship in Helsinki, Finland as he stormed to five victories.

The day started sunny with some light breeze present. The Race Committee was able to complete the first two flights before the forecasted wind direction change took place. That put the competition on hold for half an hour, before the wind settled down into its new direction, where it stayed until the end of the day. It rose constantly towards the afternoon before coming down at the end of the day.

Out of the 35 scheduled flights for the round robin, 13 were completed on the opening day and Snow was the stand out racer amassing five victories and no defeats.

Following the American with five wins out of six matches is Joachim Aschenbrenner (DEN), Mark Lees (GBR), and Pierre Quiroga (FRA). Four teams are yet to score but with plenty of round robin action remaining time is on their side to qualify for the quarter finals.

The racing continues with flight 14 set to commence on Thursday 24 July at 09:30 local time.