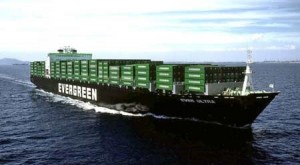 July 28, 2014 – The global container carrier, Evergreen Line has announced enhancements to its services to/from Dublin (Ireland) and Liverpool (Northwest England). From its hub in Rotterdam the line will offer a twice-weekly service to Dublin and dedicated slots on a weekly basis to Liverpool.

The move is designed to more effectively integrate the line’s services to/from the North of England and Ireland with its extensive global network. Evergreen will run its own independent service on a weekly shuttle basis between Rotterdam and Dublin and will also commence a slot exchange arrangement with common carrier X-PRESS feeders on its weekly Dublin service from Rotterdam.

As part of the same slot exchange Evergreen will additionally take space on the X-PRESS weekly service to Liverpool, also connecting to deep-sea line-haul service via the line’s Rotterdam hub.

Evergreen sees the combination of its own vessel operation together with exclusive use of slots on a well-established feeder service as a significant improvement to the service it can deliver to its customers in two very important regions of trade. The arrangement meets both customer demands for regular and reliable service to Northwest UK and Ireland and cost-effective operational parameters.

Overall transit times to and from both ports will be enhanced and there will be an increased ability to coordinate the trans-shipment of cargo at Rotterdam. In addition to allowing its customer base on Merseyside and in the Republic of Ireland greater access to its worldwide service network, Evergreen believes the new initiative will also better serve other regions of the UK, including the North of England, Midlands and Scotland. With road transport becoming increasingly susceptible to unforeseen delays, customers requiring a more carbon-free approach to transport and fuel costs ever a consideration, Evergreen believes the short-sea option to be an important one to develop.

The Evergreen operated Vega Stockholm has a capacity of 698TEU and is due to make the inaugural sailing on the Dublin service from Rotterdam on 30th July. The slot arrangement on both X-PRESS services to Dublin and Liverpool will commence in the same week.