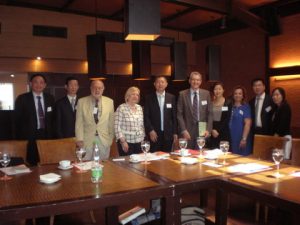 Aiming to strengthen the relations and to develop the mutual cooperation in the field of commercial arbitration, the Piraeus Association for Maritime Arbitration and the Shanghai Arbitration Commission agreed to implement the provisions according to a signed protocol during their recent meeting at the Piraeus Marine Club.

The increasing business transactions between Greece and China, mainly following the successful presence of COSCO, were important parameters in the discussions. Through its subsidiary Piraeus Container Terminal (PTC) the target is to handle approximately 3.7m TEUs this year.

Also the numerous new building orders placed by Greek interests at the Chinese shipyards underline the necessity to define a practical framework of relations between the parties and establish ways to support cooperation in order to achieve common objectives.

The President of the Hellenic Marine Technical Consultants Association (www.marineconsultants.gr)  and member of PAMA BoD  Mr Dimitris Capaitzis, briefed the Chinese delegation about the important role that the HMTCA  members could successfully perform by  providing  expert representation of the Greek and foreign  shipping communities  in their relationships with shipyards, insurers, financial institutions, classification societies, national and international authorities, maritime courts and arbitrations.