The Urban World through Tinted Glasses…

Battersea Basilica is the title chosen by artist Clare Johnson for a series of prints that have an imposing structure themselves. In her work, Clare endows some of Britain’s greatest industrial architecture with an almost religious aura.

It is more than 30 years since Battersea Power Station ceased to transmit electricity, but its might and majesty has become an enduring feature of London’s skyline. The mammoth edifice has never ceased to emit visual energy.

Clare’s Battersea print series is among her striking interpretations of the manufacturing and public utility legacy in her new exhibition, entitled The Urban World through tinted Glasses, at the Barbican Library until August 27 2014.

Power of Prominence. Mono-print and screen print. By Clare Johnson.

As an enthusiast for monuments stubbornly guarding the industrial past, she reasserts their power in graphic designs in the style of vintage hand-tinted postcards. She combines photography, mono-printing and screen-print.

Her empathy with her historic surroundings “is a blend of nostalgic awareness sourced from current urban environments, ” she says.

Coal-fired Battersea Power Station, designed by Sir Giles Gilbert Scott, dates from 1933. It was sited close to the Thames by the private London Power Company for ease of access to cooling water and coal supply. It burned 1m tonnes of coal annually, most of it brought by sea from South Wales and the North East. The London Power Company and later the Central Electricity Generating Board owned and operated dedicated collier ships.

The edifice – which with the addition of third and fourth chimneys in 1955 became the largest brick building in Europe – was recognised as worthy of preservation, with the award of Grade II listed status in October 1980, but was the subject of long wrangles as to what to do with it. The current owners, backed by Malaysian investors, are redeveloping the site with a park, office space for 5, 000 people, 200 shops and restaurants, accommodation, and leisure and recreation facilities.  “Soon you could live in it if you have the means, ” remarks Clare.

Her recent work evolved when she moved from London to live in Lowestoft. The industrial landscape there brought to the fore her appreciation of “practical buildings where form follows the function.” She adds: “I hunt country-wide for suitable industrial buildings and landmarks.”

Clare’s home is on the north side of the Suffolk port, from the inner harbour of which a water navigation to the River Waveney was built in 1833 to evade the higher import duties imposed in Norfolk. Having thrived successively on fishing, engineering, shipbuilding and offshore, the ABP-managed port of Lowestoft handles a variety of dry cargo and has facilities for the offshore and renewable energy facilities.

In this, the most easterly town in England, Clare can gaze from her window on the water sparkling in the sunshine.  Close by is a grain silo which she has depicted in her prints of what she calls The Most Easterly Grain Tower. Down the road is a drydock where vessels including the Thames paddle steamer Dixie Queen have been serviced.

Water towers are among other structures that intrigue this artist – she punningly calls a relevant series H2-OH. Clare is a member of the British Water Tower Appreciation Society, which campaigns to document examples that are claimed to have “no historical or architectural merit.” Information on water towers is sketchy because  it was once deemed necessary to protect the security of the public water supply, and with privatisation of utilities, important archives were lost. The society says that British water tower engineers, architects and builders led the world in this technology. 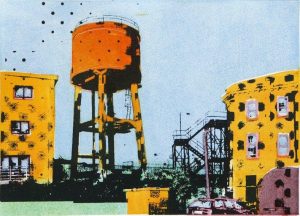 At the Barbican show, Clare includes new images of the Barbican and new prints of the south London ‘brutalist’  Trellick Tower block.

Clare says that she “chases landmarks seen from trains or car windows” and manipulates her photos in the manner of early printing methods. The process she follows makes each print unique. Her photo forms a positive for a single colour screen print, on top of which she places an inked acrylic sheet and passes this through an etching press to achieve the colour tint. The plate is passed through the press many times when she changes the order of print so that the saturation of colour varies, often greatly.

Clare has been a featured artist at the Skylark 1 Gallery, Gabriel’s Wharf, by the Thames, and other 2014 scheduled appearances will be at the Norwich Print Fair in September; and in October the Affordable Art Fair, Battersea, just a short walk from that iconic power station…

The Urban World through Tinted Glasses: Clare Johnson’s exhibition at the Barbican Library runs until  August 27 2014.