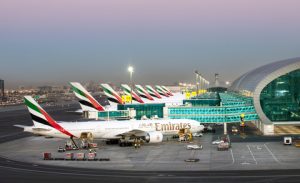 Launches special fares to Europe, Americas, Africa and the Middle East to mark the occasion

Kolkata, 4th August 2014 – Emirates, a global connector of people and places, joins Indians in celebrating 67 years of Indian independence which will be marked on August 15, 2014. To make flying extra special for its passengers from India around the occasion, the airline has introduced special fares to Europe, Americas, Africa and the Middle East, for booking from August 4 until August 10, 2014.

Emirates, which launched services to India in 1985 with one daily flight to Delhi and Mumbai, today operates 185 flights to 10 Indian destinations connecting India to over 140 global destinations via Dubai. Since the launch of services Emirates has flown over 42 million passengers to and from India. The airline employs more than 12, 000 Indian nationals in a variety of roles across the Emirates Group, including 73 pilots and 898 Cabin Crew. Emirates also supports trade in the Indian market by carrying more than 3, 000 tonnes of cargo from India to various points across the world every week. To mark this year’s anniversary the airline commissioned a specially designed infographic to highlight some of the key facts and figures related to its Indian operations since they began 29 years ago. 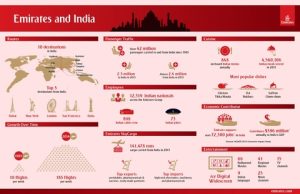 Passengers travelling from any of the 10 ports Emirates serves can book their return journey to the Middle East starting from INR 21, 858 (Economy Class) and INR 52, 312 (Business Class) as well as other destinations across its global network for travel between 11th September–10th December, 2014.

“We would like to congratulate India on its 67th Independence Day. Emirates has been committed to serving India since the launch of our first flights to Mumbai and Delhi in 1985, the year when the airline first started flying” said Essa Sulaiman Ahmad, Emirates’ Vice President, India and Nepal. “29 years later we continue to serve passengers flying from India with the unique product and service which Emirates epitomises worldwide, most recently shown in July when we commenced operations to Mumbai with our flagship A380 aircraft. These special fares are a small gesture of appreciation from Emirates for its customers in India celebrating Independence Day.”

Aboard modern aircraft, customers are looked after by highly trained, multinational and multilingual cabin crew. The aircraft also features ice, Emirates’ award-winning in-flight entertainment system which has up to 1, 800 channels and offers a great range of entertainment in the form of latest blockbuster movies, subtitled Hollywood films, music, TV and games. It includes 66 Bollywood movies, 41 regional language movies in 9 different Indian languages 15 Indian TV channels and 25 channels of Indian music.

Onboard passengers can also enjoy the flavours of Emirates’ recently launched new Indian menu which features regional dishes from across India. In fact, Emirates serves 848 on-board Indian menus annually out of which Chicken Tikka Masala, Dal Bukhara and Saffron Chum-Chum are the most popular dishes across its network.

In addition, passengers who fly regularly can join the Emirates popular Skywards frequent flier programme and earn Miles, which can then be redeemed in various ways such as for upgrades with Emirates anywhere on the network, spending Miles on flights with partner airlines, or with our partners in hospitality, car hire, finance, lifestyle and retail. Miles can also be consumed for purchasing vouchers redeemable at luxury hotel suites; theme parks; brand-name shopping or spa treatments.

To book and for a complete list of terms and conditions and destinations which are applicable, customers can visit www.emirates.com/in.

Emirates Airline (www.emirates.com) is a connector of people and places around the globe. Based in Dubai, Emirates is one of the world’s most recognised airline brands through its support of premier sports and cultural events. Emirates has been inspiring travel and facilitating trade between the India and the world since 1985.

On-board its modern and efficient fleet of 212 aircraft, Emirates offers award-winning comfort and service, delivered by friendly cabin crew representing over 130 nationalities. On the ground, Emirates connects millions of people each year through its other operations including Emirates Holidays, its destination marketing arm, and tour operator Arabian Adventures. A multinational and multicultural employer with over 160 nationalities working together, Emirates is committed to connecting people around the globe, and helping them discover, enjoy and share new experiences together.

What the most expensive vessel will buy you…